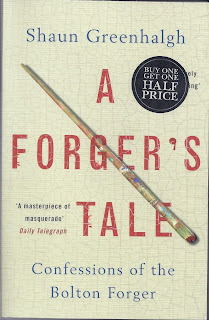 This is a very interesting book, and not just as a work about the craft knowledge of a very successful forger.

First, it is interesting as narrative because the text is written by an unreliable narrator, rather like Clive Driscoll’s In Pursuit of the Truth (reviewed here on 13 September 2015). I say this not because  of the self-justificatory theme which runs through the book, but because some of the stories told provoke (in me) the reaction This is a wind up, a reaction consistent with the author’s own claim that there is personal satisfaction to be got from deceiving a self-satisfied art world.

That connects to a second level of interest which attaches to the fact that the author is someone who could have become a successful member of the middle-class but rejects that as an aspiration and destination (perhaps only after the death of a much-loved, more highly educated girlfriend) staying close to his roots both literally – he lives with his mum and dad - and metaphorically. Like Clive Driscoll, the prose style is intended to remind you constantly of this rejection. It sits uneasily with the fact that the author was clearly a youthful prodigy with an extraordinary memory and extraordinary practical abilities, focussed around an interest in serious art which has been life-long. The prodigiousness has something in common with that which one associates with autism or what in the past were called idiots savants. With or without such associations, the extraordinary ability is something to be admired.

Then there is the craft knowledge of a forger, spelled out over many pages and showing an extraordinary breadth and depth. In my own line of business as a stamp dealer, we encounter forgeries but nearly all of them are not only bad but often display childish ignorance – an envelope with an 1890 postmark but the address written in biro, and such like. Greenhalgh is in another league, not really replicated in the stamp world since the 19th century days of Fournier and Spiro.

Finally, there is an interest for the philosophy of art, not only in relation to the standard question about the possibility of the perfect forgery. More importantly, the author rightly emphasises that in the visual arts, artists always work with materials and that those materials are of importance and interest in their own right, as are the craft ways in which they are worked. We tend to look for an artist’s overall vision, but it is always expressed through the very knowledgeable working of very specific materials.

Email ThisBlogThis!Share to TwitterShare to FacebookShare to Pinterest
Labels: Clive Driscoll In Pursuit of the Truth, Shaun Greenhalgh A Forger's Tale