Review: Ferdinand von Schirach, The Girl Who Wasn't There 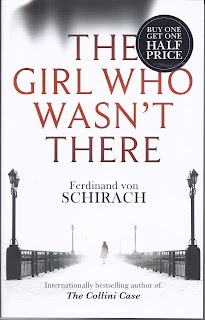 I didn’t find this a gripping novel in the way that the author’s previous book The Collini Case is gripping: I read that book in a single sitting (see my Review 16 March 2014). With this one, I struggled.

Roland Barthes back in the early 1950s developed the concept of a “Degree Zero” of unmarked prose in modern writing; he had in mind works like Camus’ L’Etranger – the original English translator of that novel found its plainness so unacceptable that he or she simply padded out the Spartan text with invented flourishes. Von Schirach adopts a Spartan style reminiscent of Camus. For well over a 100 pages everything is described in flat prose, short sentences resisting emotional charge or effect. I don’t think this is the translator getting it wrong.

For example, though there are clear similarities between this book and some of Houellebecq’s writings (notably La carte et le territoire reviewed here 1 August 2012), von Schirach – unlike Houellebecq who is very good at it - does not try to write erotically charged and arousing prose; he just narrates sexual scenes as he might narrate having a shower.

I was on the point of giving up (even though the book is very short) when the murder mystery section opens – at page 115 of the 215 page book - and the writing becomes more lively, more open and even funny. The first joke appears as late as page 142 (top line) and I found it inordinately funny – that’s what emotional starvation does to you.

Alternatively, you could say that it shows good crafting, good pacing. I don’t think so. I think the pace – or if you like, the tone – is unchanged for too long (115 pages say) and then the murder mystery is compressed and underdeveloped.

Like Houellebecq in La carte et le territoire von Schirach imagines himself into the work of a modern artist of conceptual orientation (actually a photographer) and is thus able to create a complete work – a project, an installation – for his character just using words. The reader can enter fully into this totally imaginary art work. This perhaps illustrates the weakness of conceptual art, which is often no more than a narrative illustrated with a few props. But von Schirach has done his background reading and some of the more interesting passages in the second half of the book are those which give the background to his photographer’s disappearing trick.

There is a happy ending which is so brief and abrupt that it could be called trite.

My advice: in his next novel, von Schirach should give himself another 50 or 100 pages and he should change the pace, the emotional tone, more often. Trite but possibly true.

Posted by trevor pateman at 02:06 No comments: 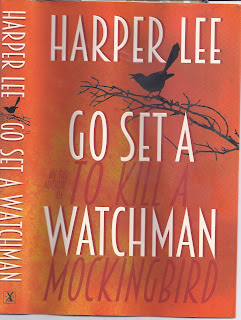 The book has the overall sentimental feel of the work which followed it.But it would have been best for To Kill a Mockingbird to have remained the one-off, stand-alone achievement which it has been since it was published.
Posted by trevor pateman at 12:34 No comments: