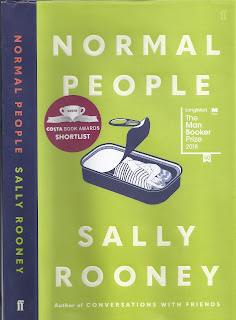 Posted by Trevor Pateman at 09:01 No comments: 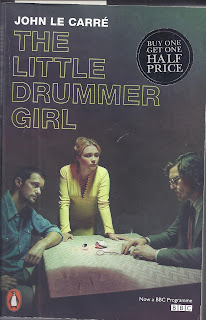 This is a very long book, 640 pages of reasonably spaced text in my edition. Published in 1983, the story is set within the ongoing conflict between Israel and the Palestinians. The setting remains much as it was, nothing much has changed there. The book does not have a dated feel at all, which is surprising given that it mobilises a great deal of then-current contextual information.

It is not the most popular of le Carre’s books and one can see why.  Though an enthusiast, my attention weakened during Chapters 6 and 7 which record an extraordinarily long and intense interrogation of Charlie, the main character, by agents of the Israeli security services. It is only much later in the book that the pace quickens and we are hooked into a Who will Survive and Who will Die narrative. I made it to the end. Like A Perfect Spy, it is a novel of great emotional intensity.

Google won’t tell me who it was who said that the same causes which make one person a Protestant on this side of the Pyrenees would have made them a Catholic on the other. I think it was Voltaire but maybe it was John Stuart Mill. But le Carre’s novel could be thought of as a prolonged, and profound, exploration of that theme. He finds a way of showing how one could believe at the same time both in Israel and the Palestinian cause. Know enough, learn enough, and you will find your loyalties totally divided. Only ignorance or accident of birth on this side or the other side of the Golan Heights could lead you to plump uncritically one way or the other.

He achieves this result by inserting his main character into both sides of the conflict. She is recruited into the Israeli cause, as their agent, partly on the basis of her public espousal of the Palestinian cause. This makes it possible for her to act credibly when she is inserted deep into a Palestinian terrorist group, but that then also puts her in tension with her sponsors and her agent-runner, Israeli Joseph who doubles as Palestinian Michel until both are totally confused in Charlie’s mind. All this is very well done, in detail and in depth. And I read the conclusion of the book as at best ambiguous and more likely as an expression of the view that, joker or thief, there is no way out of here. That’s the legacy of  what is now a long century of history.

Posted by Trevor Pateman at 11:23 No comments: