Review: Suzanne Rindell, The Other Typist 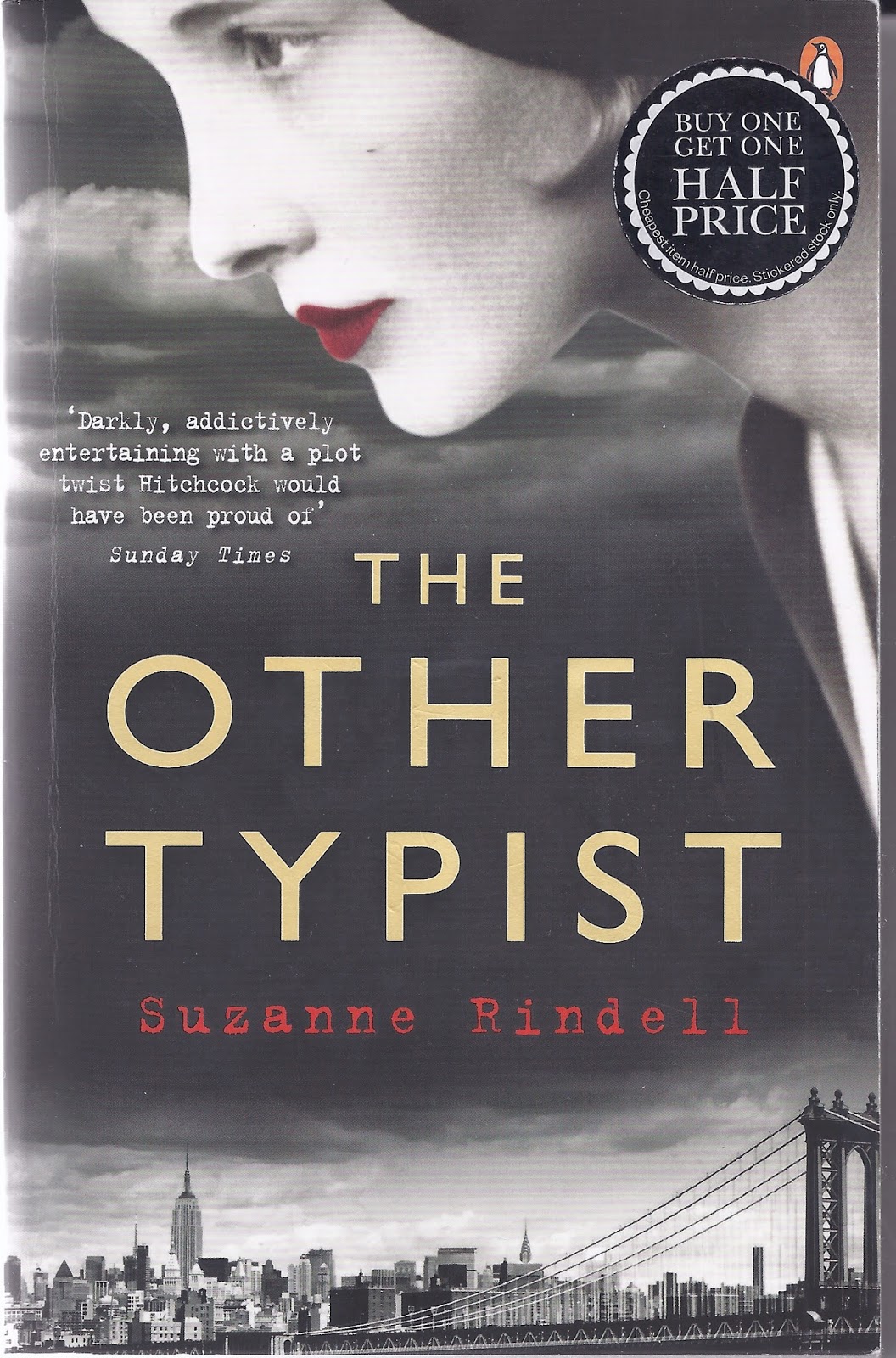 Nowadays, young people writing their first novels seem to do it as an extension of their social networking. This thought occurred to me flicking to the Acknowledgments at the end of Taiye Selasi's Ghana Must Go - they link her in to well over a hundred individuals, alphabetically listed except for God who gets Liked first.

Suzanne Rindell does not have half as many Links or Likes, but enough for me to feel that at least one of them should have been of more actual help.

Rindells' first person narrator is cast as a police precinct typist in 1920s Prohibition America. She adopts a rather arch tone, is probably mad and certainly oblivious to her own self-serving inconsistencies. For most of the time, she is credible.

She loses credibility when the author slips into anachronism - or, at least, since I am not an expert on 1920s US urban dialects, what appears to this elderly English reader as anachronistic.

Now it is the job of those who read your novel in draft and get their names in your Acknowledgments to point out things like this and it is the job of the novelist to make sure she finds at least one reader with the necessary ear. Forget about the Links and the Likes, get an Expert.

I was more than distracted when I read, " I remember thinking at the time, aside from the simple fact of our gender, we did not appear to have much in common" (page 46). Now I would bet money that a typist in 1920's Prohibition America would have used the word "sex". It is only in 2010's America that Professors in Literature Departments of US universities (Suzanne Rindell studies in one) have prohibited the use of the word.

The novel is quite successful and I read it all. The pacing is a bit unsatisfactory - large chunks of new information are hurriedly dispensed in a few pages to be followed by longer sections of longeurs. As a result, the novel did not really build suspense, at least in the mind of this reader.

Posted by trevor pateman at 01:12 No comments:

Email ThisBlogThis!Share to TwitterShare to FacebookShare to Pinterest
Labels: Suzanne Rendell The Other Typist, Taiye Selasi Ghana Must Go

Review: Tim Weiner, Enemies A History of the FBI 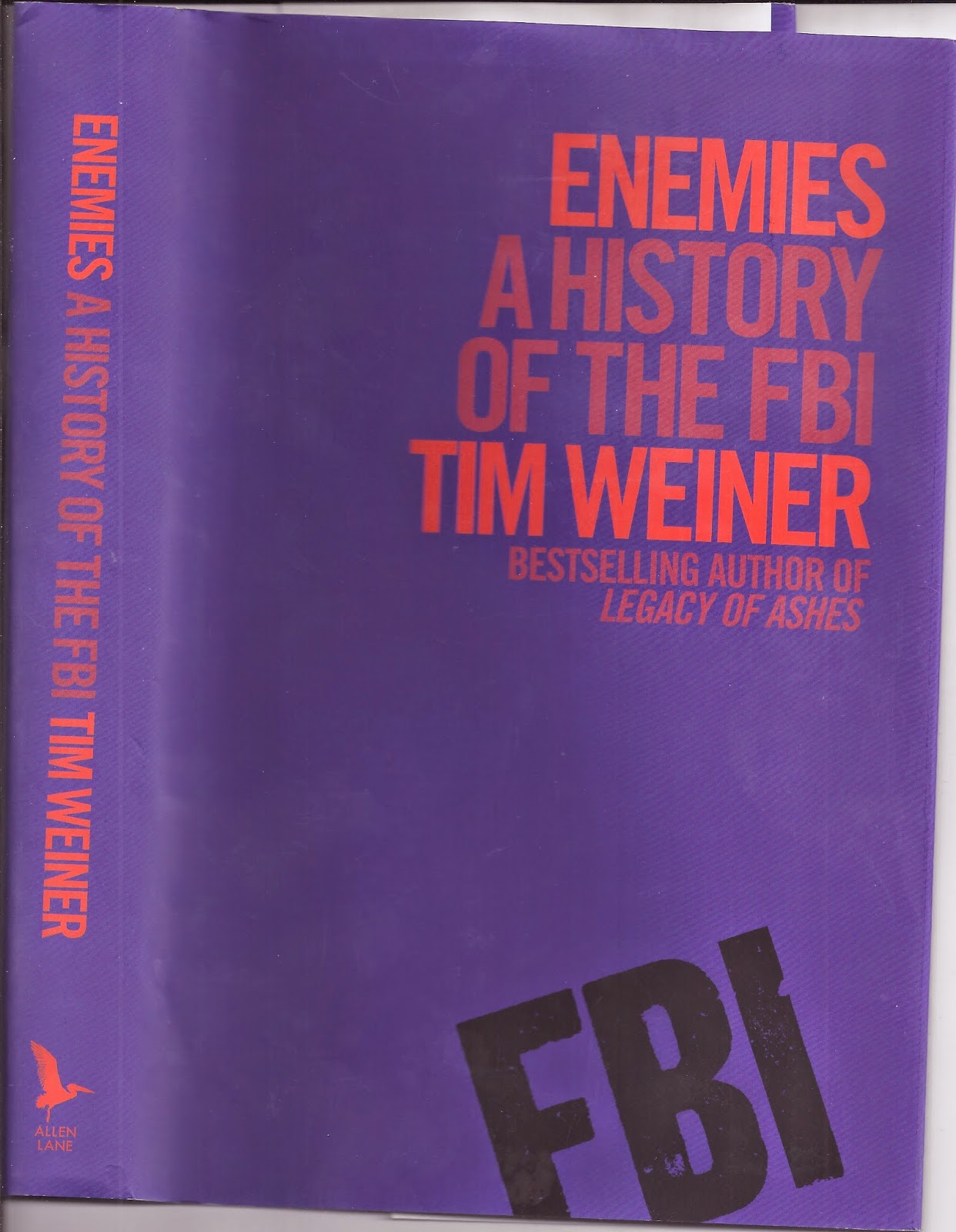 No doubt in every country, some things cannot be questioned. In the United Kingdom, where I live, you cannot really question the continuation of the Monarchy without making yourself an Outsider on whom, quite probably, a file will be opened somewhere. In the United States, you cannot question the Constitution - even though it has been amended from time to time. If you said that the Constitution is at the root of many of America's most profound problems, you would certainly be put on someone's List.

And yet not a month goes by without it being obvious to the rest of the world that the Separation of Powers and Checks & Balances enshrined in the Constitution as they work out in practice paralyse American government, both Federal and State. It creates a system which is weak and wide-open to corruption. It ensures that major problems are left untackled, often for decades. It fails to provide citizens with basic securities, so much so that many of them think that the solution is individual gun ownership - something you would only expect to encounter in a lawless third world failed state.

Tim Weiner constructs his book around the theme of the perceived and perennial conflict between the preservation of liberty and the construction of security, fudged over decades by Presidents and the FBI by simply doing things illegally and off the books. Edgar Hoover perfected the system, keeping the records of illegal operations in a personal system "Not For Filing" which meant that the operations were neither indexed or retrievable in the FBIs archives.

It's a sorry tale, told chronologically and generally in thumbnail narratives some of which are abandoned inconclusively. As a result, it's not particularly readable. There are partial narratives some of which are very interesting. For example, American anti-Communism does not begin with the Cold War. It dates back to the Russian Revolution itself and it shaped J Edgar Hoover's thinking and policies right from the beginning of his career after the First World War. It continued to shape the FBIs thinking to the point of ultimate absurdity when student movements in the 1960s and 1970s were perceived as Communist front organisations.

More generally, there are constant reminders throughout the book about the ignorance and cultural isolation of Americans: they don't know geography or history or foreign languages. They simply don't understand the rest of the world. The surveillance may be awesome and cost megabucks; the briefings fed to the President are often pitiful.

But I read the background narrative in the whole book as the tragedy of the Constitution which nowadays yields a Congress of paid lobbyists and headline-grabbing nutters, a Supreme Court which can never really make up its mind, and Presidents who are sometimes able but thwarted in their attempts to tackle the major problems America faces - and sometimes stupid and simply unable to recognise the existence of those problems. The American Constitution nowadays is malware which infects and paralyses the whole society.

Posted by trevor pateman at 00:43 No comments:

Email ThisBlogThis!Share to TwitterShare to FacebookShare to Pinterest
Labels: Tim Weiner A History of the FBI 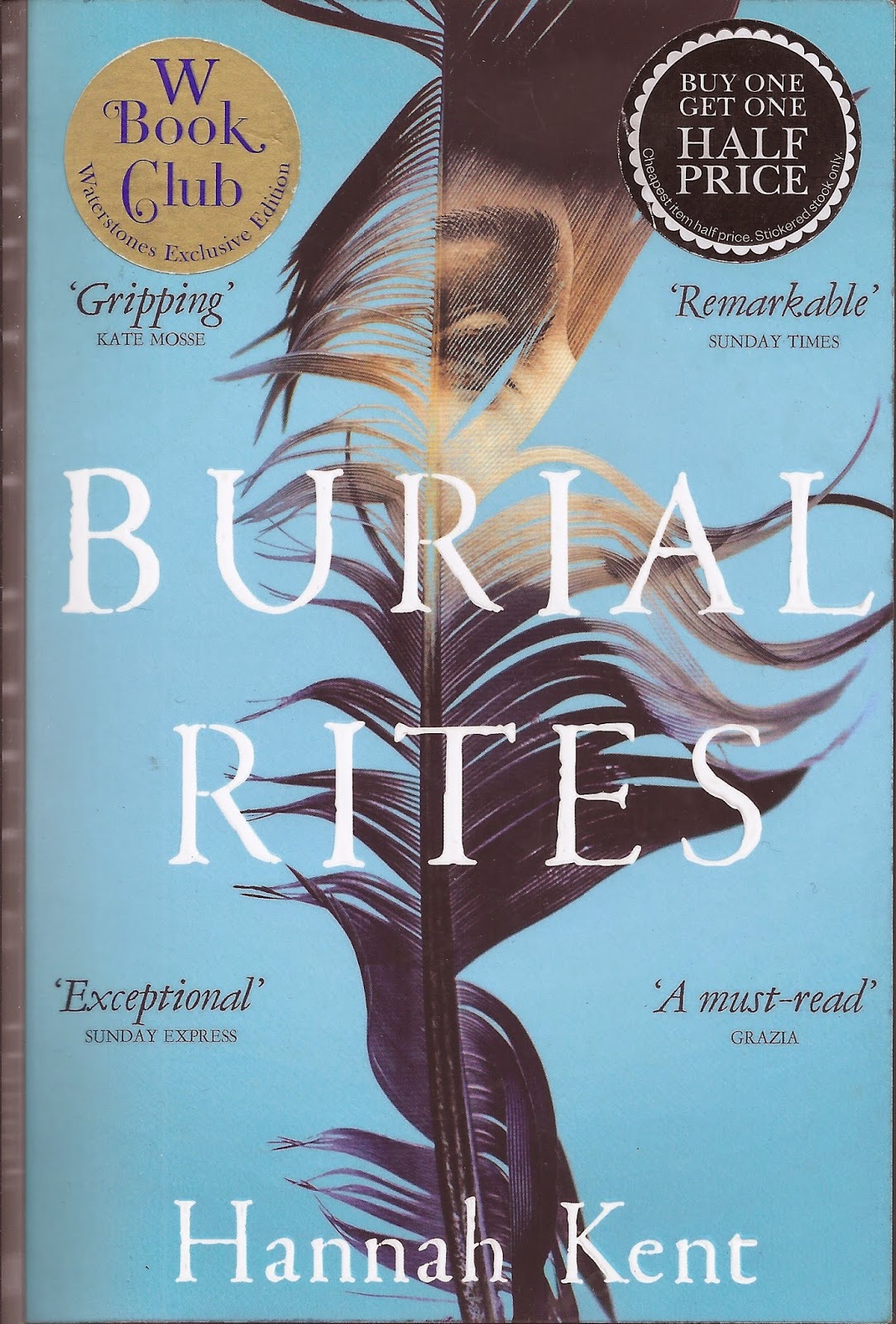 This is an extaordinary imginative achievement. Hannah Kent gives herself an obscure historical and geographical setting - Northern Iceland in the 1820s - which she has had to thoroughly research, places in it a tale of passion, murder and punishment which is based on a real history - and then manages to turn everything into a compelling, tragic narrative.

It reminded me of the Thomas Hardy which used to reduce me, as a teenager, to emotional blubber. As Agnes narrates her life and, eventually, the crime for which she will be beheaded - at the same time becoming the last person to be executed in Iceland - we know that this is how the story will end, however much we might wish it otherwise. And as the story unfolds, we wish it even more. That is part of Hannah Kent's achievement.

Another part is the cast of supporting characters, two of whom - the man and then the woman who listen to Agnes' narrative - undergo their own spiritual transformation as her tale unfolds.

It is incredibly well done and I recommend it very highly.

Posted by trevor pateman at 01:43 No comments:

Review: John Grisham, The Racketeer and Javier Marias, The Infatuations 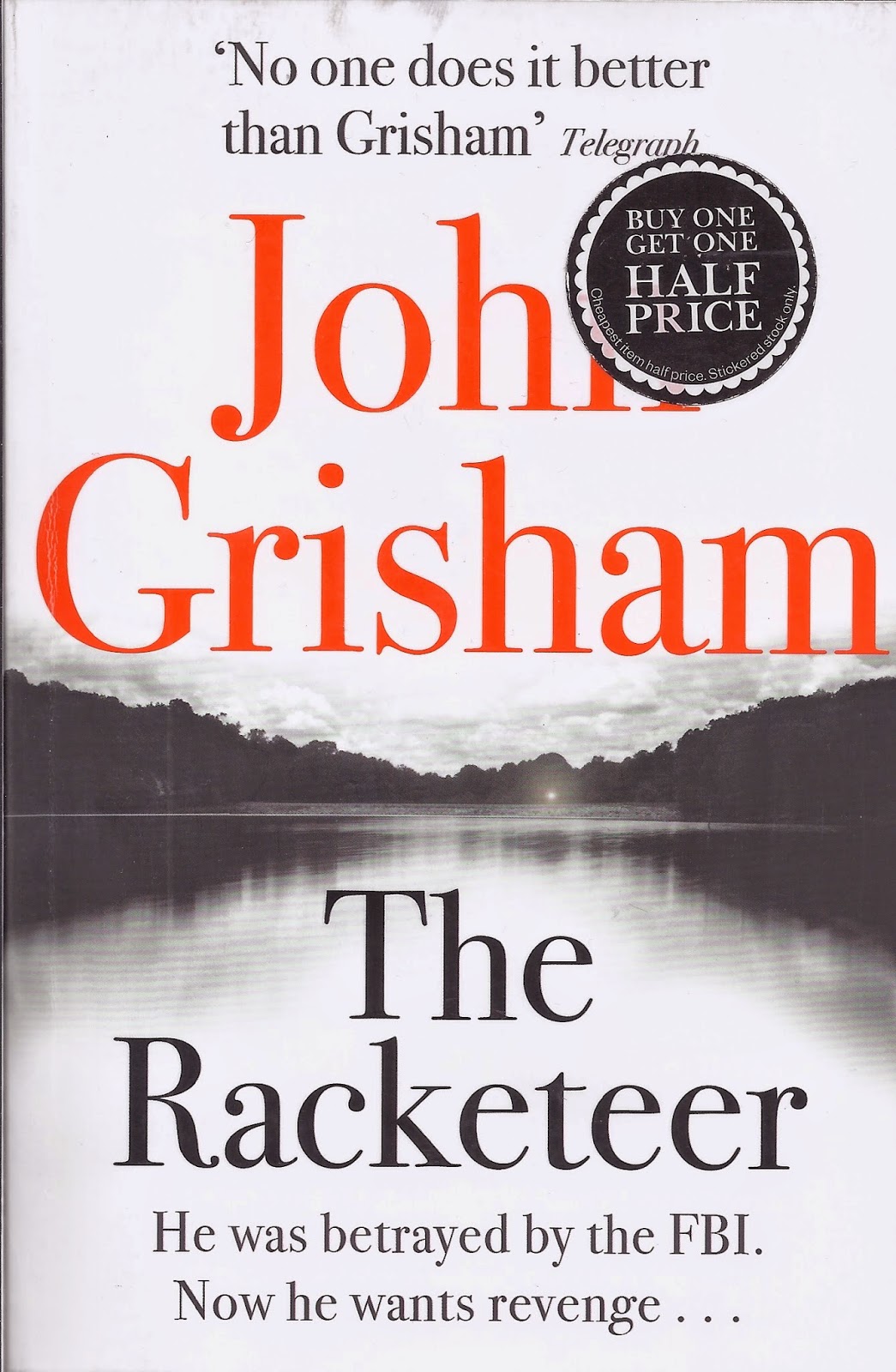 I have discovered that when I have too many worries - and on the wagon as far as alcohol is concerned - then an engrossing thriller is a great comfort. John Grisham was very effective in making me think about his plot rather than my anxieties. Thank you!

It's a complicated, ingenious plot and of course you want to understand it and get to know how things turn out in the end. Equally, there is a setting for the plot which - intentionally or not, I don't know - invites one to more serious reflection.

Grisham writes bleakly about the American criminal justice system - police, lawyers, courts, prisons - and reminds you forcefully of many things you know or half-know and which add up to putting a very big question mark over the idea of the United States as a civilised country. When it comes to Justice, it ain't. It's vicious, primitive and scary. Not just Death Row and botched executions, but violent prisons, corrupt law enforcement, crooked lawyers, and running through it all, racism.

This is one reason why you sympathise with the first-person narrator of Grisham's book, a black lawyer wrongfully imprisoned who finds an ingenious way to take revenge on the system. And rather than feel that he acted in any way wrongly, you end up feeling that he has merely righted the scales of justice - maybe two wrongs do make a right.

And soon you are thinking about Justice, one of the main themes in The Infatuations by Javier Marias. This is a long (373 page) book, slow moving, complex, complexly written in very long sentences. It is at one level a Murder Mystery but more importantly a sustained reflection on Crime, Justice and Punishment - and Passion. There are passages (pages 214 - 215 and 342 - 343 for example) which seem designed to make us wonder if we have got it all wrong. Maybe we do more harm than good by looking for criminals and punishing their crimes. Maybe there are cases where we should just ignore what we know and certainly not alert anyone in authority. They will only make matters worse. Maybe if we do nothing, then in many cases the scales of justice will over time tip back into balance. Maybe a wrong can be righted by doing nothing. 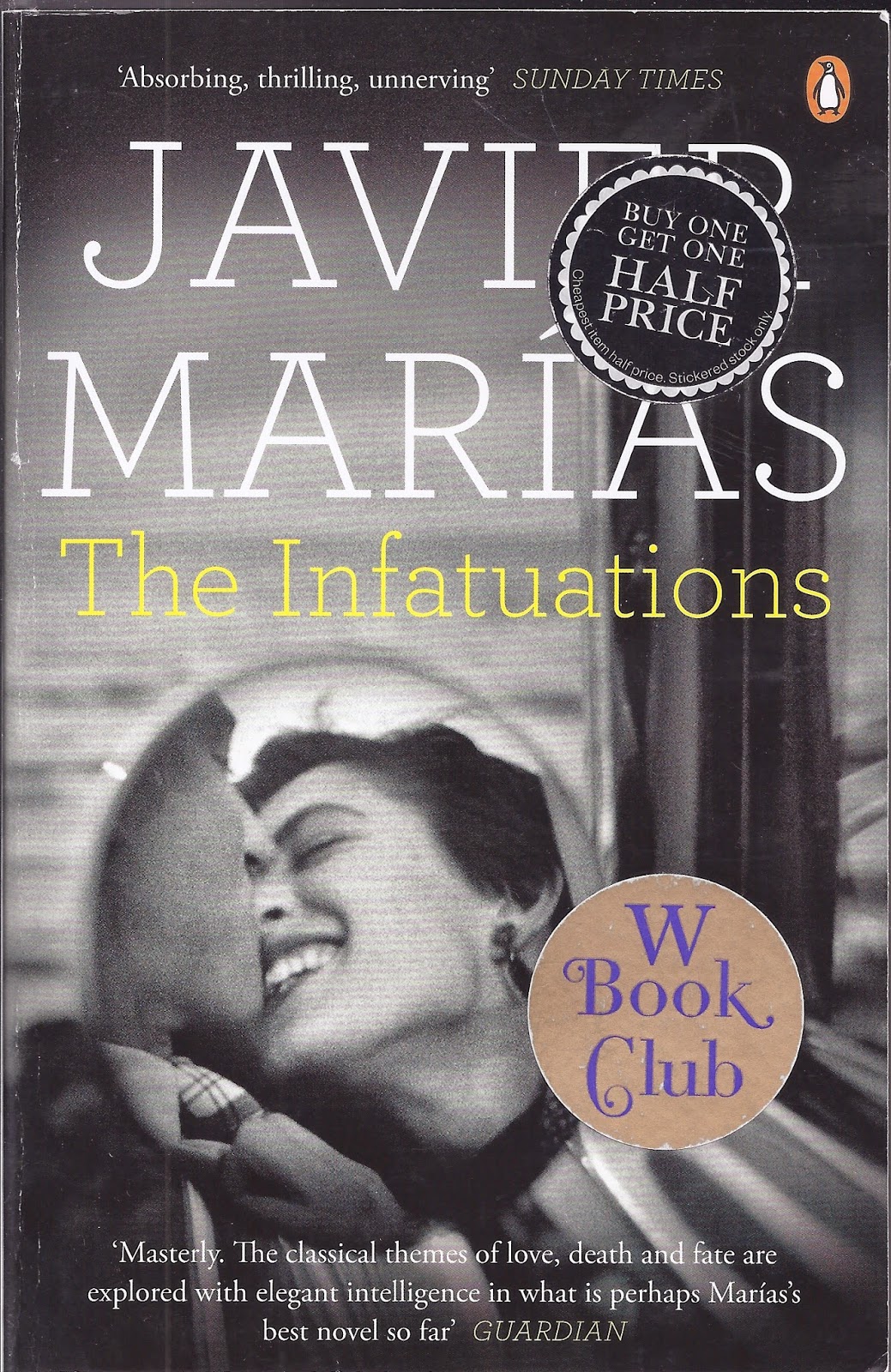