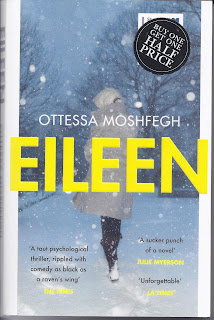 This is an interesting book, but not quite as good as the jacket quotations. Nothing new in that. It is supposed to count as a “psychological thriller” or a crime novel on the strength of the last forty pages out of 260 but that’s pushing it and, in any case, those pages seem a bit contrived and implausible – there are not just loose ends at the end but awkward jumps and implausible claims. In contrast, what goes before is a sustained effort in character building. Most of the book is devoted to building the character of the first-person narrator, Eileen, who isn’t very likeable, has habits not for the squeamish, and lives an awful life spent between two prisons – home and her place of work. It is only late in the book that a second, contrasting character is introduced – Rebecca, who is imagined by Eileen as her opposite: adventurous, clever, glamorous, the usual suspects. At this point, I was reminded of Suzanne Rindell’s The Other Typist where the life of the narrator, a police precinct typist, is transformed by the arrival of her Other. Rebecca's arrival turns the novel into Eileen's Coming of Age story.

I did sit up late to finish the book but then the late sitting only began because I could see I  had just thirty pages to go. Before that, the tone of Moshfegh’s narration is very even – the language, the pace – and had my own mood been distracted I think I would have given up on the book long before the end. That said, the imagination deployed in creating Eileen and the serious commitment evinced in doing it over so many pages is impressive. But a lot better than that? Let’s wait until we read about people reading this book for a second or third time.
Posted by trevor pateman at 01:28 No comments: 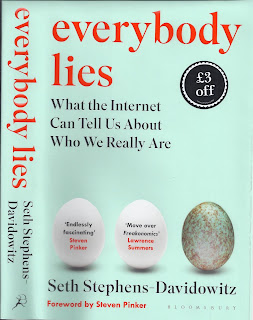 When people answer questions from pollsters, they lie. When they make Google searches, they don’t. They know they can delete their browsing history and that’s enough privacy for the average user. People make an awful lot of searches and Google collects mega-quantities of reliable data which tell us what people are thinking and how they are feeling. This Big Data is now being mined by people like Seth Stephens-Davidowitz [S-D from now on] to answer all kinds of question, many of them at the applied end of the social science spectrum.

This is a well-meaning book but it is terribly naïve – not about people, whose deviant sex lives the author cheerfully catalogues, but about social science or social theory in the broadest sense. I nearly gave up on the book at chapter 2 “Was Freud Right?” which tells us that Freud was a theorist of “phallic symbols in dreams” (page 46) and goes on to prove that he was wrong about them.  S – D has been educated at Stanford and Harvard but has still has not picked up the knowledge that Freud’s reputation-making book, The Interpretation of Dreams (1900), begins with a very long and comprehensive critique of theories of dream symbolism (“Dream Book” theories) and follows up with an alternative account in which dreams make idiosyncratic, improvised choices of symbols to express the dream thoughts and that what is drawn on to provide the symbols for the dream is largely if not exclusively the experience of the previous day. The italicised words turn Freud’s account into a falsifiable theory whatever Karl Popper may have said (S-D has come across Popper on Freud). So S-D starts out from something worse than a schoolboy howler and as a result chapter 2 is abysmal. If you are inclined to cultural despair, you will delight in the fact that the abysmal is published by Bloomsbury.

Things do get better, sometimes significantly so, but the general problem remains that the Big Data S-D loves is crunched according to often unanalysed background theories and preconceptions. The general approach is to ask someone “What do you want to know?” and if they want to know if violent cinema films cause violent behaviour, then S-D will hit the Big Data until they yield a Yes or No answer. There are a lot of “What do you want to know?” questions which S-D is only too willing to answer. He rarely stops to consider that there might be a problem with the question.

I quite liked the Conclusion which S-D has calculated will be reached by only a minority of readers. But this Blog was created on the promise that I would only review books I had read cover to cover, give or take footnotes. But then I suppose I should acknowledge that one of S-D’s findings (page 259) is that people who make online loan applications in which they promise to repay a debt are more likely to default on a debt than those who don’t promise. The same people also take God’s name in vain. Nothing new there.
Posted by trevor pateman at 13:03 No comments: