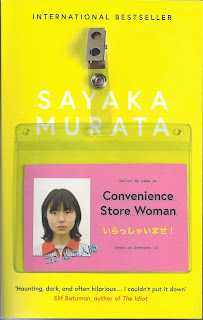 Like Charlie Chaplin, Keiko does not quite get it. In the school playground, some boys are fighting and the girls are screaming for someone to stop them, “so I went to the tool shed, took out a spade, ran over to the unruly boys, and bashed one of them over the head” (page 8).

Things improve for Keiko when her sister begins to provide her with simple scripts for navigating the difficulties of social life, fake stories which will satisfy the unsettled, but her big breakthrough comes when she takes a part-time job as a convenience store worker. Here there are many ready-made scripts provided by the training manual and by the store’s routines and Keiko settles down (as Miss Furukura) for eighteen seemingly contented years until serial loser and oddball Shiraha appears. They both have the idea that teaming up (in an oddball way) will get the world off their backs – the world which wants to see marriages and breadwinners and babies and divorces. It doesn’t work out.

This is a very readable, often funny, often poignant, short novel written in the first person to be read in a society where (I am told) you’re abnormal if you don’t fit in. I don’t know how good is the translation. The text has the kind of awkwardness you might expect from a narrator who might be diagnosed as suffering from a sort of social autism, but the English can’t quite make up its mind where it sits in terms of both vocabulary and style.

Nonetheless, Keiko remains endearing and I am sure that if she ever visits England, someone will be sure to give her the script which instructs that Japanese tourists should photograph things, but not look at them.

As well as Chaplin, I also thought of Gregor Samsa. Keiko is another of those characters who is a sort of walking alienation device who by failing its requirements gets us to see how society works. She deserves to be read.