Review: Gary Gerstle The Rise and Fall of the Neoliberal Order 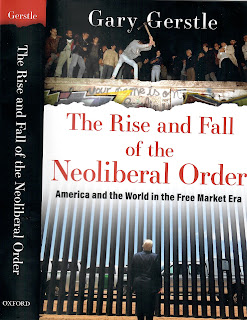 This is an excellent book. It starts from what seems to be a very simple and even simplified model of American economic and political history in the past century and proceeds to document the case for its explanatory value. What convinced me of the model’s value was the realisation that it could be transferred to British history of the same period and equally well-supported from evidence.

Gerstle’s key concept is that of a political order. This captures the reality that in democratic polities with competing parties a common ground can emerge which is sustained for long periods across changes in the political complexion of governments. In the USA, Roosevelt’s originally Democratic Party New Deal of the 1930s persisted and was even doubled down on by the Republican administration of President Eisenhower.  In the same way in Britain, the Labour Party’s war time and post-1945 creation of a mixed economy and welfare state was sustained by Conservative governments through to the administration of Edward Heath. Here the common ground was locally identified in the expression Butskellism built from the names of the Conservative politician RA Butler and the Labour leader Hugh Gaitskell. Butskellism also embraced a commitment to NATO and the Atlantic alliance.

Political orders fail and are replaced for complex reasons not always understood at the time. The New Deal and Butskell political orders were replaced by neoliberal orders which are often characterised using the names of the leaders who drove through the initial changes; thus we have Reaganomics and Thatcherism which survived through the Democratic administrations of Clinton and Obama in the USA and the Labour governments of Tony Blair in the UK. Neoliberalism was a political order which transcended and survived political party differences.

Gertsle concludes by documenting how the neoliberal political order has fallen apart in the USA with Donald Trump finding a constituency to vote for the destruction of at least its internationalist aspects. The UK narrative would focus on Brexit and the ongoing confusion within a Conservative Party whose neoliberals dressed in ethnonationalist clothes have cut the UK out of its principal free trade area. The eventual outcome is unclear. So far, all that we know is that the USA was weakened by Trump and the UK weakened by the Brexiteers, to the satisfaction of Mr Putin if no one else.

Posted by Trevor Pateman at 00:43 No comments: