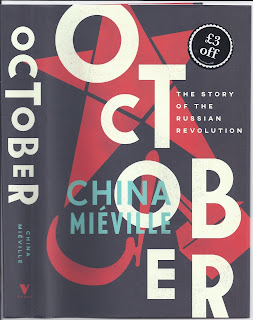 I sense that in Russia, the hundredth anniversary of 1917 is a bit of an embarrassment. The current government stresses continuity with the past and so links itself to the double headed eagle and two-faced Russian Orthodoxy. It is out of the question to celebrate the February 1917 downfall of the Romanovs, who now have a cult following among the very stupid. Nor is the regime in any position to celebrate the Bolshevik seizure of power in October 1917 since it exists only as a consequence of the downfall of hated Bolshevik power in 1991.

Outside Russia, it’s not so difficult – the Romanov dynasty deserved its fate, period – but hindsight casts a very long shadow over the October revolution.

China Miéville has had the excellent idea of writing a would-be popular narrative of 1917, a sort of John Reed story but with the benefit of all the archives which historians have now turned into many books. The narrative starts with great brio but rapidly narrows its focus to a blow-by-blow, day-by-day account of political events in Petrograd. This in turn descends into a chronicle of socialist in-fighting so painful that you can see why the words socialist and sectarian now seem inseparable. Miéville is dispassionate enough to realise that sometimes he is demonstrating the truth that it is not only second time around that history presents itself as farce. As someone who has read quite widely in the history of this period, I still found myself reading about factions and organisations I had never heard of and have no reason to want to read about again.

The author is good on the Provisional Government's multiple weaknesses. It is hard to believe how a government in a position to take fresh stock of the situation could have persisted in a war from which there were so many very good reasons to get out. The legacy of the Romanovs was a country which could not win a major war, still less realise grandiose designs - Nicholas's government reckoned to get Austrian Galicia and Constantinople as war loot in return for their contribution to the Allied war effort.

The focus on Petrograd politics and personalities of the revolution could have been lessened. The author does fairly repeatedly allude to  hunger but doesn’t really present it as a driving force. He has more to say about Peace and Land but less about the Bread which was the first word in the Bolsheviks' revolutionary slogan. Russia had undergone a sort of Industrial Revolution but no corresponding Agricultural Revolution. It’s major cities – Petrograd and Moscow – were far away from fertile agricultural areas. There was always a problem about feeding the cities and  the First World War turned the problem into an impossibility when not only were there armies as well as cities to feed but the fact also that peasants who worked the land were drafted to be killed in the trenches. The Romanovs could not feed Petrograd, nor could the Provisional Government, nor could the Bolsheviks. In the end, the Americans stepped in and created a vast Relief Administration in the early 1920s. People still starved and would continue to do so.

I did not baulk at any of the facts presented (except at a 5 November instead of 7 November on page 3), but I felt the scale of the February revolution – the Revolution in the eyes of contemporaries – is perhaps underplayed and the abrupt cut off on 26 October is too soon –Miéville should have followed John Reed at this point and given us Ten Days That Shook The World, taking us into the first week of November 1917 (Old Style).