Review: Matisse in the Studio, edited by Ellen McBreen and Helen Burnham 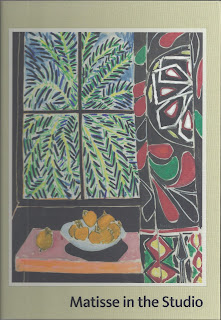 Everything we write is marked by the time and place in which we write, sometimes very lisibly so as in this interesting study of Matisse’s relation to the objects which he collected over a life-time, housed in his studio and used in his work. The contributors to this exhibition catalogue have had to read about and hear about Orientalism, the male gaze, cultural appropriation and so on. As a result, they sometimes write as if they are walking on eggshells and you can sense it.

It shouldn’t be like that. Either you accept a theory and deploy it actively, which in this case might lead to rather more criticism of Matisse than is to be found here, or you ignore it and just get on with what you want to draw our attention to.

That said, the authors are good at drawing our attention to what Matisse thought he was trying to do, as expressed in letters and interviews; how in practical terms, he tried to do it using a studio which he tailored over decades to his purposes; and how that converts into the work he produced. There are some very telling illustrations and juxtapositions of object and work.

Because it is a discourse which is out of fashion, there is really nothing here on how Matisse’s personal life and work intersected so that his separation from his wife in favour of his secretary is not even a blip, and the fate of his daughter Marguerite likewise (page 183). There is also very little on the later cut-outs which interest me partly because they seem to be the way in which an old man turned to good account a bad hand dealt him by health and age.
Posted by trevor pateman at 01:52

Email ThisBlogThis!Share to TwitterShare to FacebookShare to Pinterest
Labels: Ellen McBreen and Helen Burnham Matisse in the studio, Matisse in the Studio