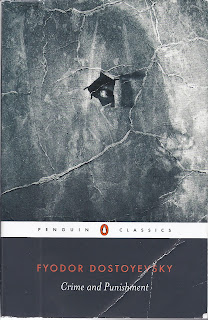 
Mr Dostoyevsky has written a long book – 650 pages in my Penguin Classics edition – but it is still a gripping psychological thriller. In the foreground of the story are poverty, prostitution, mental illness according to the latest theorising, God according to more traditional theorising, the Russian soul and, seemingly inseparable from that, Russian vodka. There is a lot of vodka in this book, as there was and still is in Russia where it has always held down male life expectancy. The short Epilogue suggests a sort of redemption through suffering and unconditional love but I think it would be wrong to see Mr Dostoyevsky as a simple bringer of The Good News. He is too clever to fall into that trap, though there will be readers who try to push him into it.

His substantial cast of characters do genuinely seem to develop in the course of the novel, and to go off in unexpected directions. It doesn’t feel as if they are mouthpieces for views Mr Dostoyevsky has fully worked out in advance. They each have a distinctive voice and the author allows those voices plenty of free expression throughout the book. Indeed, the largest proportion of the book is given over either to set-piece conversations between two or more characters or to interior monologue. There is little commentary or obvious authorial intrusion, to the extent that rather than have a character exclaim something within inverted commas with an authorial remark like he laughed to follow it, Mr Dostoyevsky (at least, in my translation) incorporates the laughter into the speech with a he-he or ha-ha. I have to say that I found this rather wearing and unsatisfactory since it is so clearly authorial anyway and also terribly repetitive.

Professor Bakhtin has said that the style adopted in this book could be called polyphonic. Dostovevsky assembles a cast of characters, as one might in a play, and lets them speak, each in their own voice. None of them speak with the voice of the author though he clearly has his partialities, most obviously in regard to Sonya, a Magdalen figure who is chosen by Raskolnikov as his confessor – a traditional role for a prostitute. In this case, confession is a route to intimacy rather than a result of it.

It is part of his skill that at the same time as he is setting off characters by their conversations, Dostoyevsky manages to move the narrative story line forward in a way which keeps the reader reading. It helps in this respect that he has an astute detective who is hot on the trail of the murderer and keeps up a cat-and-mouse game intended to bring the perpetrator to the point of confession, a strategy in which he is arguably successful. The detective plays a vital role in moving the story along.

As with many Russian novels, it is hard to keep track of characters who sometimes appear with first name and patronymic and sometimes with familiar names.My edition lacks a Cast of Characters such as often appears at the front of  Russian novels. One would have been useful here, at least for this older reader.
Posted by trevor pateman at 00:14