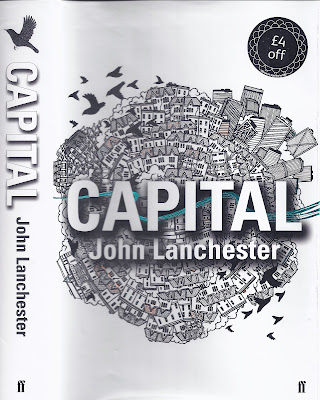 This is a long book (577 pages in my 2012 Faber hardback) and I read it in sittings, a method authorised by its four Parts and 107 Chapters.

John Lanchester knows how to write and knows how to craft. He has previously written novels (good ones) and in addition Whoops! Why Everyone Owes Everyone and No One Can Pay - an excellent non-fiction introduction to the global financial crisis.

In Capital he deploys his talents as both novelist and commentator. Capital is both a Whodunnit novel set in London and a sustained commentary on the way London's economy works to structure and colour people's lives. Lanchester held my interest on both accounts.

London is the whole world in one city (Ken Livingstone) and Lanchester almost crams the whole world into one street, Pepys Road. He has a City trader and his wife, an elderly woman representative of those who lived in the road before it was gentrified, an Asian shop keeping family, a Premier League footballer (but brought from Senegal)and his minder, a failed asylum seeker from Zimbabwe, a Polish builder, a Hungarian nanny, Banksy under the name of Smitty. And he has the Metropolitan Police. There is no one from the LGBT community, an omission which I guess is deliberate.

When you craft characters for a novel, they take on a life of their own, and at the same time the author comes to like them or loathe them. Lanchester makes it clear who he has come to like (morally approve of) and who he dislikes. But he leaves some characters ambiguous and others morally neutral. He also has Views about London and deploys those effectively - for example, when writing about the way life is structured around alcohol.

Lanchester resolves his quite simple but effective Whodunnit; he grants unambiguous happiness to just a couple of his characters; and he leaves the lives of others unresolved for us to ponder.

In only one case did I feel he drops the thread, forgetting that he has given Quentina a love interest which might have provided her with a Rescuer in her time of trouble.

This is a subtle book with broad sympathies. The portraits are carefully informed, the London backdrop has verisimilitude. Not on every page, but quite frequently, Lanchester can be very funny.

For novels, I am obliged to end with a recommendation, in this case: Highly Recommended.
Posted by trevor pateman at 09:43