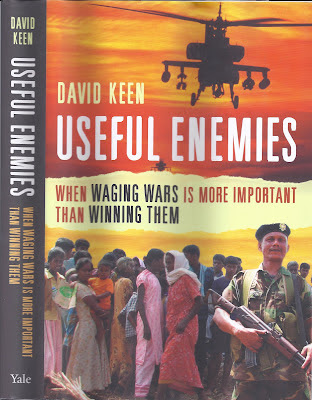 It is often the job of science - and, more humbly, academic research - to show that the way things seem is not always the way they are. The sun seems to rise in the morning and set in the evening whilst the earth remains fixed; in reality, the earth goes round the sun.

David Keen asks why so many wars last so long - decades in some cases - and are so often inconclusive. He answers that it is because there are frequently - indeed, almost always - war stakeholders who want it that way. On both sides or all sides. This what he calls the political economy of war.

That is only the start. Keen's book is a compendium of examples of what war is really about everywhere in the world: Colombia, Guatemala, Sierra Leone, Democratic Republic of Congo, Sudan, Sri Lanka, Vietnam, Yugoslavia, Iraq, Afghanistan. There are so many examples that unfortunately they weaken both the theorisation of war and the literary structure of the book.

In terms of theorisation, though Keen has a chapter on the US war economy (chapter 8) he seems reluctant to draw the conclusion that war and the continuation of war around the world is primarily driven by the USA hunting for new wars as if it was hunting for new markets. Indeed, all big wars are markets for US military products.There is no other contender for the main driving force of war. In 2010, the USA spent $698 billion on defence, some 43% of world defence spending. China comes in second at $119 billion (7.3%). Of every American tax dollar, 41.6 cents is spent on defence (page 172). And that's without direct arms exports, available to almost all comers.

How these extraordinary sums play out on the ground is nicely illustrated by one statistic which Keen provides elsewhere: in March 2010, the US Defence Department awarded a $2.16 billion contract with local truckers in Afghanistan to supply American troops. Basically, you can fly stuff in to one or two main bases like Bagram but you have to use road transport to shift it around.

This contract is equivalent to "around 10 per cent of Afghanistan's gross domestic product" (p 81).

That is staggering.This is not a contract any Afghan is going to risk by making too much peace. And it is a contract where lots of people will want a share of the booty. According to the US House of Representatives, truckers on the ground [paid around $2.50 per hour] believe

"that a large portion of their protection payments to local warlords for convoy security subsequently go to the Taliban or other anti-government elements, the forces which actually control much of Afghanistan and many of the key routes used for transportation of U.S. supplies" (pages 81 - 82)

Put differently, both local warlords (notionally pro-Government) and the Taliban (notionally anti-Government) have a big financial stake in the continuation of this trucking operation.

It gets worse. If the protection payments reduce the level of attacks on truck convoys to zero, someone in the US budget office will soon suggest that the trucking ought to be getting cheaper now that security is so much improved. Foreseeing this, a trucking company has an incentive to speak to a warlord asking him to speak to the Taliban and, with money changing hands, secure a few attacks on passing convoys. Not very good attacks, of course - shooting up the tires rather than the truckers.

It is only when trust breaks down that you start shooting up the truckers.

In a number of places, Keen does draw a tentative conclusion that if you want a nasty civil war in a poor country to end, you stay away. No foreign military intervention. No aid. Without these incentives to more war, war weariness will set in and some kind of settlement will be reached.

A few more pacifists in the world would also help.

Throughout the book, Keen does draw attention to the well-known fact that the victims of modern wars are primarily ordinary civilians who are abused by all sides: government troops who claim to be protecting them, rebels ditto, occupying (American, British) forces and their missiles ditto. Civilians often end up feeling that they have nowhere to turn, though sometimes they are lucky when one side - often rebel forces (like the Vietcong) - is better disciplined and more oriented towards their needs and aspirations than the others.

Keen has an interesting chapter titled "Shame and the Psychological Functions of Violence" in which he analyses the dynamics by which soldiers and rebels become abusers and rapists. There is now never a war in the world where armed forces - insurgent or counter-insurgent - do not rob, brutalise, torture, maim, degrade, humiliate civilians who happen to be in their way. Quite often, this is a preferred alternative to shooting straight at the enemy. After all, he may then shoot back.

In terms of theorisation, I missed an inference which is fairly obvious when one looks at civil wars in developing countries and which deserves to be loudly proclaimed. War flourishes where political control over military forces is weak. In the West, there is a very clearly articulated notion that military forces are subordinate to political control. In the old Soviet Union, the doctrine was taken even further: political commissars shadowed military officers at all levels.

This does not entirely preclude the military from developing its own agendas - most obviously, in the US and the UK there is revolving door which takes senior officers straight out of the armed forces and into the offices of arms manufacturers. Nor does it preclude "bad wars" where political agendas drive unwinnable or unjust conflicts, like those in Vietnam and Iraq. It is in this context also that demoralised soldiers from deprived backgrounds are prone to commit abuses, thereby reinforcing the unwinnability or the unjustness of the conflict with which they are engaged.

In countries where the state and the government is weak, the scope for military free-lancing is enormously increased. In countries like Turkey, Iran and (I think) Egypt, the army is a major entrepreneur, engaged in all kinds of profitable business activity. In countries like Sierra Leone or DR Congo, more simply, the army has wanted control of the diamonds.

This is an interesting book, depressing reading but important for understanding the world we live in. David Keen - Professor of Conflict Studies at the London School of Economics - does his scientific job, trying to show us how appearance and reality are different. I feel he could have done it perhaps more analytically and less by way of examples - albeit, thoroughly researched ones (there are fifty pages of Endnotes and Bibliography to this 2012 Yale University Press book)
Posted by trevor pateman at 07:32