Review: Sean McMeekin, History's Greatest Heist: the Looting of Russia by the Bolsheviks 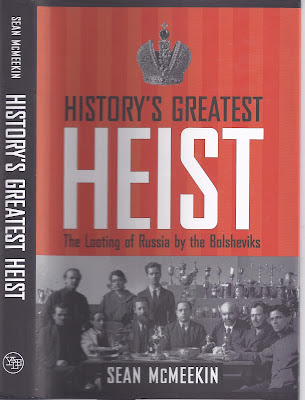 Those who say Let History Be My Judge probably don't intend that to mean Let the Historians Be My Judge.

Historians know that their work inevitably and constantly involves the exercise of judgment but don't all think that this obliges them to act as Judges. Some think that you can write a book on What The Bolsheviks Did which leaves readers to form the conclusion and It Was All Wrong.

Others think this is false modesty: whether you like it or not, you are always leading your readers to a conclusion. Better - and more entertaining - to state the conclusion yourself.

The Bolsheviks - "a ruthless gang of Marxist ideologues"(page xxii) - were Baddies. They seized state and commercial property to which they had no lawful claim. They robbed individuals of their private possessions and the robbery was often with violence.

McMeekin's judgements in the opening pages are very loud, accompanied by many adjectives. But once he gets down to his historian's work, they do fade into the background and his book (published by Yale UP 2009) becomes much more interesting.

The Bolsheviks did not fund the Russian Revolution in the years 1917 - 21 from taxation. There was pitifully little economic activity to tax and what there was mostly took place in areas outside Bolshevik control.

The Bolsheviks funded the first few years of the Revolution primarily from the vast Imperial gold reserves which they acquired in two instalments. First, in 1918, from the State Bank when it finally caved in to Soviet demands. Second, in 1920, when the Czechoslovak Legion handed over the head of the White forces, Admiral Kolchak ,along with the Kazan part of the Imperial gold reserves which had been secured by the Whites.

Those gold reserves, in principle, allowed the Bolsheviks to import goods - mostly intended for the Red Army - in the context of the breakdown of almost all domestic production. However, there were two snags.

First, a naval blockade enforced primarily by the British until the end of 1919.

Second, the question of legal title. Until the Soviet regime secured some kind of de facto if not de jure recognition from other European powers, its title to the Imperial gold was in doubt or worse. The legal snags lasted until 1920 - longer in France and the USA.

Much of McMeekin's book is devoted to the study of the means by which the Soviets circumvented the obstacles. It's a story in which Sweden plays a major role, especially from the moment when its Royal Mint agreed to melt down gold ingots stamped with the Imperial Russian Eagle and create new ingots stamped with the Swedish arms.

It's also a story which involves a large number of bankers, bagmen, conmen, and adventurers who were happy to take the Bolshevik rouble provided it was in gold.

The Imperial gold reserves, though vast, would not last forever. The Bolsheviks supplemented them with expropriations of gold, silver, jewels, art and artefacts from the Church and from private individuals (many of whom had fled or would soon flee). These seizures - crude, inefficient and often bloody - yielded vast quantities of stuff which came to fill warehouses in and around Moscow under the control of an organisation known as GOKHRAN (State Treasury for the Storage of Valuables).

There was so much stuff, that much of it was treated like scrap. Silver book bindings were prised off for the value of the silver; Icons were stripped of their jewels. The Bolsheviks behaved like the Spanish seizing Inca valuables.

The most valuable stuff - the Romanov Crown Jewels, notably - was difficult to shift, despite the efforts of another group of dealers and crooks. However, had McMeekin continued his narrative beyond the early 1920s (he does so, but only sketchily)he could have shown how by the 1930s that even in France and the USA the dodgy provenance of the stuff had virtually ceased to be of concern to anyone.The passage of time is a very good laundry.

There is a popular but useful book by Toby Faber, Fabergé's Eggs (2008) which tells, among other things, how GOKHRANs accumulations of Imperial kitsch ended up for sale in American department stores (see especially chapter 19).

Lenin once said of the social democrats, Don't listen to what they say; watch what they are doing with their hands. McMeekin has turned around that advice in this valuable study of where, in the years immediately after 1917, the Bolsheviks' money came from and what they did with it.

As with many history books, the interest is often in the detail and McMeekin's book is full of such detail, backed up with an impressive array of references. I learnt a lot from reading it and McMeekin writes well. He just needs to go easier on the adjectives.

I spotted only one error: at page 177 he says that the Soviets channelled money "to the [British] Communist newspaper, the Daily Herald". I do not think that the Herald was ever a Communist newspaper. It welcomed both Russian Revolutions and it was opposed to British intervention against the Bolsheviks (enough to justify a subsidy) but it was never an official (big C) Communist paper.
Posted by trevor pateman at 03:34