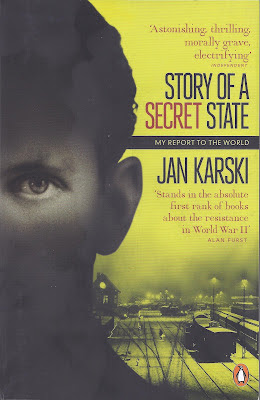 This is a book with a complicated history. Originally published in the USA in 1944 to considerable success, it did not appear in Polish until 1999 - but with additions provided by the author (who died in 2000). This 2012 paperback, published by Penguin, is based on the Polish version with footnotes taken from a 2010 French edition and a new bespoke Afterword by Andrew Roberts. The whole runs to over 450 pages.

Jan Karski is the man who in 1942, as the principal Courier of Poland's wartime underground government (the "secret state" of the book's title) carried microfilm evidence and his eye-witness accounts of the Holocaust in Poland to his own Government in Exile in London, to the British government (he met Anthony Eden) and to the American government (he met President Roosevelt). Partly because he could not produce photographic evidence - and partly because it was inconvenient to believe him - he was not wholly believed by the Allies though he was believed by his own government which in December 1942 published in London, The Mass Extermination of Jews in German occupied Poland.

Just two of the book's 33 chapters are devoted specifically to Nazi extermination policy. Karski was twice taken into the Warsaw Ghetto and writes about that. He was also - almost unbelievably - taken into Izbica Lubelska, a holding or transit annex for Belzec. Both of these chapters make for difficult reading.

Karski emphasises over and over again that in German-occupied Poland the Nazis found it impossible to create a Quisling government. They faced passive resistance on a very large scale and, beneath that, a secret state which sought to act like a regular state and a democratic one to boot. It conceived itself as having authority from the London Government in Exile (headed by Sikorski during the period Karski writes about). It had ministries organising education and such like; there were political parties - free to operate independently of each other, publishing newspapers and so on - and there was an underground Army (the "Home Army") which eventually launched the 1944 Warsaw Uprising. The Resistance had money, wide support and lots of talent.

The underground government issued orders which Poles in general were expect to obey and it condemned collaborators to infamy or death. It harassed the Nazi occupiers at every opportunity.

The Russians had different ideas. Stalin intended to maintain the partition of Poland, keeping territories occupied in 1939, and he intended that the post war government of Poland should be under his control. In 1944, as Soviet troops moved into areas of Poland they did not claim territorially, they were followed by a Moscow-controlled Government which beginning its life in Lublin soon took full control. The London Government in Exile never returned and the "Secret State" emerged into the daylight only to go down in defeat: at the time of the Warsaw Uprising, Soviet troops were already close to Warsaw but did nothing to intervene and prevent the Poles going down to defeat. They were, after all, the wrong Poles.

I think that Karski foresees this scenario and insists so much on the virtues of the Polish Underground because he knows it will have to face a Soviet challenge to its authority. But in his 1944 Postscript to the book, he simply observes "Poland's underground state, to which I belonged, was under the authority of the Polish Government in London [ note the past tense]. I know that, besides this organization, there were other elements carrying on their activities under the direction or the influence of Moscow. Because of my sincere intention to describe only my personal experiences, their activities could not properly be included in this book" .

Karki's experiences still make for gripping and moving reading as he narrates the horrors of German occupation. But Poland's next tragedy was that the elements under the direction of Moscow were the winners. Karski remained in the USA and was not honoured in Poland until after the fall of Communism.
Posted by trevor pateman at 10:55