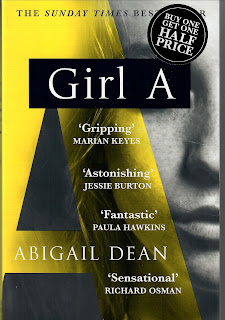 I nearly didn’t buy this book from the Waterstones table. It was suffering from Sandwich Board failure. If one shopkeeper puts out a sandwich board on the pavement, they may gain some advantage from being better noticed. But if all shopkeepers put out sandwich boards, as they now do, pedestrians ignore them because they are too busy dodging around what has become a frustrating obstacle course.

The manic sandwich board department at Harper Collins has decorated this book with fifty eight very short puffs on four sides of covers and two inside pages. Advertising 101 would have taught them that this is unlikely to convince, as recognised by one meta-puff which implores me to Believe the Hype.

It’s a pity because it’s a good novel which doesn’t need to be shoe-horned into the genre of “mystery thriller”. It’s well-crafted and structured through consistent use of alternation between Time Present and Time Past; it has a credible narrator and a credible story line developed towards a concluding revelation. The story line picks up on the known fact that the families of religious fundamentalists are often enough sites of awful child abuse of one kind or another. In the less grave cases, survivor memoirs can be found: in the recent past Tara Westover’s Educated and Rebecca Stott’s In the Days of Rain are examples which have literary as well as documentary value. Then there are the related novels, like those of Jeanette Winterson.

What I particularly admired in this novel was the way in which Abigail Dean successfully imagines very different and complex later outcomes for children who have been removed from a traumatically abusive home and placed with adoptive parents, their natural father now dead and mother in prison - not least because two of their children had died in the House of Horrors, of violence and neglect.

I’d like to rescue the book from the hype. Let me put it this way: my impression is that Abigail Dean is a better writer than, say, Bernardine Evaristo whose flat prose and happy-clappy themes I find tiring. But because she has written a “Genre Novel” then - rather like John le Carré - Abigail Dean’s book has been  put into a parallel world where it won’t be given serious attention, reckoned suitable only for sandwich board treatment. But I think it stands up to careful reading and, hopefully, it will not be a one-off achievement.