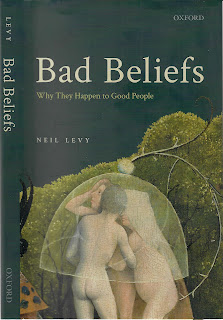 This is a very interesting, very readable book not least because the author, though presenting himself as a professional philosopher, draws on a range of theories and data culled from contemporary cognitive and behavioural sciences. His leading idea is that we live in an epistemic [knowledge] environment which is now heavily polluted by poor research, fake news, conspiracy theories, and so on, but where understandable concerns about free speech and poorly thought through notions of “balance” have so far prevented any serious clean up. This is important because self-help strategies alone cannot rescue individuals from forming false beliefs and making unfounded claims to knowledge. Indeed, it is the very fact that we are rational animals deploying our efforts in scarce real time that often enough leads us to false beliefs. We are reliant on those around us and society’s institutions for our sense of what is true and what is false and they ain’t making it easy. Reform is needed.

These problems are not as contemporary as Levy presents them; there is a long back story of concern about the power of charlatans, demagogues, and revolutionaries to lead even the thoughtful astray. That concern, in a recognisably modern form, dates at least from the eighteenth century. For example, when the charlatan Anton Mesmer started to make a big hit in pre-1789 France, the leaders of institutionalised French science and philosophy sought to articulate ways in which an ordinary non-expert person might see that he was a charlatan even without detailed understanding of his theories, such as they were[1].  True, in retrospect Mesmer clearly had some prescient understanding of aspects of the human mind which were then little understood. But this was incidental: Mesmer was running a (literal) theatre for the sake of fame and money. Something similar might be said of Jacques Lacan in the latter part of his life[2].

It would be easy to suppose that the institutional leaders were only concerned to keep outsiders outside but, as it happens, the most intellectually powerful figure among them - the Marquis de Condorcet - was not only a democrat who believed in a wide franchise (which would include women) but was responsible for a 1785 work in the theory of probabilities which showed that there is, as far as knowledge is concerned, strength in numbers: if certain conditions are met, it is rational to defer to majority opinion because the majority is more likely to be right than wrong and the bigger the absolute gap between majority and minority, the greater the reliability. Condorcet and his followers took  juries as a prime location for application of his probability work for it leads to the  conclusion that - conditions met -  larger juries are better than smaller ones and a requirement of unanimity or near unanimity much, much better than simple majority vote. What Condorcet could not anticipate was the TV programme Who Wants to Be A Millionaire which demonstrates the truth of his claims in near-perfect form.

Condorcet showed that majority voting is a good guide to truth:

(1) the more enlightened (knowledgeable) is each individual voter, with a minimum requirement that they be more likely to be right than wrong on any one occasion (p = greater than 0.5)
(2) provided that when voting, voters are trying to give the right answer
(3) and provided that they vote independently of each other - if one voter follows the lead of another, that simply reduces the effective number of voters

If these conditions are met, then in a majority vote the probability of the majority being right increases (and quite dramatically, heading towards p = 1 [certainty] ) the larger the absolute vote gap between majority and minority.

In the TV quiz show Who Wants to be a Millionaire? contestants have the right to ask the large audience for help with a question to which they don’t know the answer. Audience members are then offered four possible answers to the question and asked to select the right answer from among them. It’s rational for the contestant to confirm the audience’s majority answer as their own - and for these reasons:

(1) the Audience is likely to be quite knowledgeable. Quiz show live audiences are likely to contain a high proportion of people good at quizzes, so p is likely to be greater than 0.5.
(2) members of the audience have no motive to give answers they believe to be untrue (they enjoy giving right answers!)
(3) they vote independently of each other using push-button consoles with little or no time to consult the person sitting next to them and explicit instructions not to.

In nineteenth century England, progressive thinkers who wanted to see a more democratic society with a wider franchise always met with objections which insisted that the masses were too ignorant and too liable to be seduced by charlatans for it to be safe to entrust them with the vote. To this, progressive thinkers - most obviously the Utilitarians - responded with proposals for extending education to all, but also with a defence of the desirability of deference  to scientific authority. Deference is a key term in Levy’s book and his criteria for identifying those people and theories worthy of deference map very closely onto criteria proposed by Utilitarian thinkers. Thus Levy writes,

“A scientific consensus is reliable when it has been stress-tested, by all the disciplines relevant to the topic, for an extended period of time” (page 109)

Compare this passage from a book published in England in 1849:

“With respect to the subjects of speculation and science, the existence of an agreement of the persons having the above qualifications [natural ability, long study, personal honesty] is the most important matter. If all the able and honest men who have diligently studied the subject, or most of them, concur, and if this consent extends over several successive generations, at an enlightened period, and in all or most civilised countries, then the authority is at its greatest” (page 42) as it is in astronomy (page 43).

This passage is taken from An Essay on the Influence of Authority in Matters of Opinion by Sir George Cornewall Lewis, usually reckoned a minor Utilitarian thinker. One of his major themes is that when it comes to forming rational beliefs and opinions we have to rely on others; we cannot do it alone. This is the theme to which Levy devotes chapter 4 of his book, starting with a critique of the individualism of traditional epistemology and its impossible reliance on a chimera of “unaided individual cognition”. Sir George Cornewall Lewis provides the basic argument against this view:

“I firmly believe…that the earth moves round the sun; though I know not a tittle of the evidence from which the conclusion is inferred. And my belief is perfectly rational, though it rests upon mere authority….” (page 63).

That’s the way it is: we rely on authority much more than we imagine, we have to do so, and it is fully rational to do so IF the epistemic environment is not degraded. Unlike Levy, Lewis simply asserts that the environment is a healthy one for the passage I have just quoted continues:

“….all who have scrutinised the evidence concur in confirming the fact; and have no conceivable motive to assert and diffuse the conclusion, but the liberal and beneficent desire of maintaining and propagating truth” (p 63)[4]

Were that it was ever thus! A substantial  part of Neil Levy’s book tells the depressing story of the many ways in which it ain’t like that. I will not summarise the various stories which extend well beyond the obvious ones: denying the Holocaust, denying climate change, denying the efficacy of vaccines. Levy’s central proposal is that we need to clean up the epistemic environment on which we have to rely and he looks to nudge theory for inspiration, arguing in chapter 6 (“Nudging Well”) that nudges can support our personal rationality and autonomy, not manipulatively undermine them as is often enough alleged.

I can think of just one alternative that has ever been proposed: Auguste Comte reckoned that the intellectual environment of his time was pretty polluted; he thought the solution was to quarantine himself from it. He called this “mental hygiene”. I am sure he would have recommended disconnection from Facebook, Twitter, and much more besides.

[1] Robert Darnton, Mesmerism and the End of the Enlightenment in France (1968)

This paper, along with that on Majoritarianism previously cited,  is based on my  M Phil thesis How Is Political Knowledge Possible? (University of Sussex, submitted 1977, awarded 1978)