Review: Tim Marshall, Worth Dying For. The Power and Politics of Flags 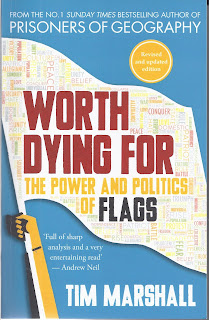 Back on 11 August 2016, I reviewed here Tim Marshall’s Prisoners of Geography which I felt had a lot of zest and a clearly-articulated argument. As a result, his publisher sent me this new book to review.

It also has a lot of zest and a great deal of incidental detail for those interested in Pub Quizzes and such like. But it does not have the analytical sharpness of the previous book and this is probably inevitable given its subject matter, a history of mostly national flags and their symbolism. A few things struck me.

Flags, flagpoles and rules about hoisting flags onto their poles etc are pretty much cultural universals. This is in some ways rather odd, since the whole business is a fairly arbitrary one. True, there are some motivated explanations of how flags came into existence – so that you could see where your own lot were re-grouping during the battle, and so on – but this hardly explains the universality and large measure of conformity we have got to now.

Where we have got to now also leaves many flags unresponsive in their design to the fact that they will (mostly) be flown at the top of large static poles. Just a couple of more modern flags – those of South Africa and, notably, Seychelles have dynamic designs which respond to the possibilities opened up by the fact that they will be attached to a pole at the left side and flutter out from that static point. Most flags are symmetrical, imagined from the standpoint of someone (the designer) looking at them as illustrations on a page. Many are also cluttered with detail which, though visible to designers at work on the page in front of them, will be lost on those casting an upward glance at a pole. Most of the flags of Latin America – Brazil an obvious exception - look to me ripe for a design overhaul. They are without flag-design or artistic merit.

Quite a lot of Tim Marshall’s text is devoted to explanation of the symbolism of individual flags. This is necessary because though flags are usually icons of something or other, what something or other it is has to be pointed out – so “X stands for Y” and then, once we are told, we see it. Technically, this is to say that flags make a great deal of use of translucent icons as opposed to transparent ones. An icon is transparent when pretty much anyone can see what is meant without any supporting verbal explanation – most road warning signs are meant to be like this, so that you can understand them wherever you are coming from. But there are resemblances between sign and object which have to be pointed out and the same sign may mean more than one thing: on one flag, the colour Green may stand for Islam, but on another it may stand for a nation’s forests or fields.

Over fifty years ago, I had a summer job in a lakeside Swedish hotel. One of my duties was to raise and lower the very large Swedish flag each day from its very large pole. I realised early on that I was being watched from guest windows as I performed my tasks, and so I adopted a sort of Boy Scout formality, marching briskly to the pole and so on. Somehow - perhaps because I had indeed been a Boy Scout - I knew that I should fold the flag carefully when taking it down and at no point when it was going up or down allow it to touch the ground. Such indeed are the expectations in Sweden and most other places, but at some point one guest did congratulate me on how I did the job. He also explained to me what the colours of the flag represented: blue for the sky and yellow for silver birch leaves. But I bet that isn’t the only explanation around for Sveriges  farger. No one made an issue of the fact that it was an English schoolboy handling the Swedish flag.
Posted by trevor pateman at 06:59