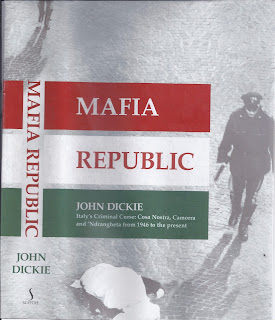 What is wrong with Italy? At the heart of Europe and the European Union, Italy ranks 72 out of 174 on Transparency International's Corruption Perception Index. Denmark and Finland share joint first place as least corrupt; Afghanistan, North Korea and Somalia are down there at 174.

It may be salutary to list some of the countries ranked less corrupt than Italy, for example: Botswana (ranked 30), Hungary (46), Georgia (51), Turkey (54), Namibia (58), Ghana (64), Romania (66) and South Africa (69). In other words, Italy is more corrupt than some countries in Africa and some countries in what was bad old Eastern Europe.

It gets worse. Towards the end of his book, John Dickie mentions in passing that in 2011 the World Bank ranked Italy 158 out of 183 countries "for the efficiency of its justice system in enforcing contracts". It was below Pakistan, Madagascar and Kosovo and just three places above ... wait for it ... Afghanistan (page 474). Enforcement of contracts includes such simple things as getting a customer to pay for goods supplied. This is a service which any modern state needs to provide; Italy's weak and corrupt state apparatus can't manage it - and that immediately creates a niche market, even today, for criminal organisations to step forward and offer to enforce contracts, for a price.

Dickie's book gives a large part of an answer to the question, What is wrong with Italy? In a review of  the post - World War Two history of Italy's three biggest Mafias - Sicily's Cosa Nostra, the Neapolitan camorra and Calabria's 'ndrangheta he shows them to be much bigger (thousands of people, not hundreds), much more robust and much more violent than one might - from a distance - imagine. He shows how they successfully infiltrated, manipulated and fed off Italy's post-War political parties, particularly the US- and Vatican-backed Democrazia Cristiana (the DC) . He documents how they spread corruption and fear in local and regional government thereby guaranteeing themselves lucrative contracts, particularly in construction and waste management, which littered southern Italy with shoddy housing developments and toxic waste.

He points out that the Vatican, Italy's fourth Mafia, (though he doesn't call it that I think it's an apt description) did not speak out against the other Mafias until 1993 when Pope John Paul II on a visit to Sicily made an unscripted attack on Cosa Nostra's "culture of death" (pp 384 - 85).

Dickie's book is full of short narratives documenting crimes of extraordinary Mafia violence. It is only at the end of his book that the reader realises that this is a little unbalanced insofar as the Mafias had and have other means of enforcing their will: for the first time, he mentions that a tell-tale sign that racketeers are at work is the incidence of a crime identified in Italy as "vandalism followed by arson", which occurs when firms fail to pay up for protection, and continues, "In 2011 , there were 2,246 cases of vandalism followed by arson in Sicily: the highest in any Italian region, and an increase on the preceding years" (page 467)

Dickie also devotes many fascinating pages to documenting the work of anti-Mafia magistrates and police often left unsupported or actively undermined in their work by corrupt senior figures in both the court and police systems and - of course - by corrupt politicians. It went and maybe still goes all the way to the top, with seven-times Prime Minister Giulio Andreotti heading the list (page 214)

It's a long book - 524 pages including the apparatus - but much, much better written than the average academic work: John Dickie is Professor of Italian Studies at University College, London