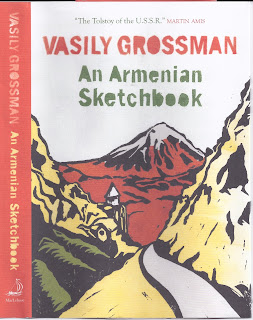 I previously wrote about Vasily Grossman's Everything Flows  (see my Post of 9 June 2012), a book I found powerful and moving. The same can be said for this recently (2013) translated work An Armenian Sketchbook first published in an uncensored Russian version Dobro Vam in 1998. The book was written in 1961, submitted for publication in 1962, and appeared in censored versions in 1965 and 1967; Grossman had meanwhile died in 1964.

The censored passages included all of the very interesting discussion of Nationalism in chapter 4 and the emotional heart of the final chapter (Chapter 12), a long, deeply felt narrative of an Armenian village wedding which culminates for Grossman in a speech by one of the guests ("the collective farm carpenter"), who addresses himself directly to the stranger invited to the wedding:

Martirosyan interpreted [ for me]. The carpenter was talking about the Jews, saying that when he was taken prisoner during the War he had seen all the Jews being taken away somewhere separate. All his Jewish comrades had been killed. He spoke of the compassion and love he felt for the Jewish women and children who had perished in the gas chambers of Auschwitz. He said how he had read articles of mine about the war, with portrayals of Armenians, and had thought how this man writing about Armenians was from a nation that has also suffered a great deal. He hoped that it would not be long before a son of the much-suffering Armenian nation wrote about the Jews. To this he now raised his glass" (page 191)

As if in reply, Grossman's book heaps praise on the Armenian peasants and workers, with whom he spent much of his time during his 1961 visit, in effect contrasting their wisdom and humanity with the shallowness he finds in officially-approved writers, in literary bureaucrats who he has to meet, and even in the officially-approved Catholicos of the Armenian Apostolic Church, Vazgen the First:

Vazgen I ...was clearly not a great man. I calmed down [from my excitement at the thought of meeting him] not because he was kind and considerate but because I realised that he was unremarkable. I had already met many people like him (page 157)

Grossman has rather more interesting things to say about the Armenian Church itself. He classifies it as essentially Pagan, where what matters is the performance of the rites and  the sacrificial slaughter of  the lambs, brought to the porch of churches to be blessed and then taken round the back to have their throats cut (I saw that happen when I visited Armenia in 1997). But if he had listened to Armenian church music, to the singing ( he visited Echmiadzin but it seems not on a Sunday) then I think he would have had to qualify that "Pagan" judgement.

The contrast between the two worlds of rulers and ruled does slip into sentimentality, perhaps Tolstoyan sentimentality. Peasants are as capable of terrible crimes as vicars of Christ. One has the sense that Grossman coming towards the end of his life and completely disillusioned with the Soviet system which he had served - and very successfully (even Stalin read his despatches as a War correspondent) - is looking for somewhere where we can place his hopes. He places his hopes in the People. It's not a dishonourable choice.


Probably I have said much that is clumsy and wrong. But all I have said,clumsy or not, I have said with love (page 194) 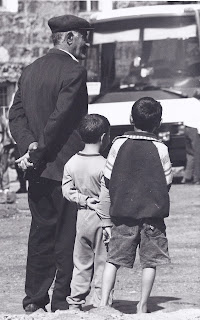 Departure of the Tourist Bus from an Armenian Village, 1997
Photo: Trevor Pateman