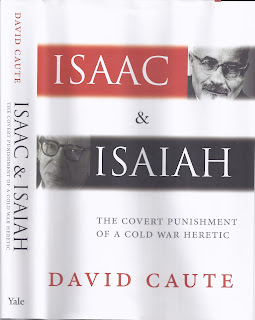 I had my doubts about buying this book. I thought it might be parochial. In the event, the plot structure is clever. David Caute re-creates for us what academic and intellectual life in the US and UK was often like at the height of the Cold War, when Western governments and intelligence agencies channelled funds in friendly directions (Encounter magazine and such like) and Moscow could still rely on loyal support from a small number of able academics and writers, people who had formed their allegiances in the thirties and firmed them up in the War. It was a period when a great deal of the scribbling and teaching done in universities, and often enough broadcast on the radio, was of a more obviously "political"  than "academic" character, and that was true whether it was "Right" or "Left".

Caute works by focussing on the lives and careers of Isaiah Berlin (1909 - 1997) - wealthy, well-connected Oxford professor and Jewish emigré - and Isaac Deutscher (1907 - 1967) - prolific journalist,Marxist biographer of Stalin and Trotsky and Jewish emigré. And he particularises it still further to the animosity Berlin felt towards Deutscher, culminating in 1963 when  Berlin blackballed him from an academic appointment at the new University of Sussex - the subject of Caute's closing chapter 22. (At some point around 1969 - 70, I researched that story but I don't now know in what context and all I can recall is a visit to the North London home of Isaac Deutscher's widow,Tamara, and - though I can't put a picture to it - a candid conversation with Isaiah Berlin [ see Footnote] - who I did for sure once meet in his rooms at All Souls).

The book makes depressing reading for anyone who is a recluse. It is about people who did networking on a far grander scale than anyone (Tony Blair excepted) today. People whose address books bulged with contacts, world-wide, and whose correspondence stacked up into archives. In Berlin's case, they inhabited colleges which were the Oxford branches of London's gentlemen's clubs (or vice versa). In both cases, they had access to publications - like the Times Literary Supplement - which published your work anonymously, allowing you to puff up your chums and poop on your enemies. Caute provides numerous examples. No one seems to have heard of the idea of "declaration of interest". (As when I state before continuing: Berlin once in 1967 gave me and a friend a cheque for fifty quid to start a student magazine and told us to spend it on champagne if the idea didn't get off the ground - unfortunately, it did).

Caute's book ends abruptly, without any attempt to sum up. He provides much information which allows us to draw our own conclusions - Berlin comes across as a timid person who habitually trimmed his opinions to the person he was writing or speaking to, no matter if the result was support for opposites. More importantly, Caute does not really assess the work Berlin and Deutscher produced. Is there anything in it which is of enduring value, which stands the test of time?

I can't answer this question in relation to Deutscher for the simple reason that I don't think I have ever read more than a line of his work. I have never read the Biographies of Stalin and Trotsky, because at  the time (1960s - 1970s) I didn't read biographies (and I never met Deutscher so never had to mug up).

I do now read biographies but ones which have been able to access the Archives opened since the fall of the Soviet Union - Sebag-Montefiore on Stalin, for instance.

In relation to Berlin, I guess I  read quite a lot and as a university teacher I assigned the obvious ones, like Two Concepts of Liberty, as reading for student essays. But if you asked me now for a short judgement, I'd probably have to say that they belong as much to the higher journalism, to belles lettres, as to any obviously "academic" study. Perhaps no worse for that. (And as an undergraduate at Oxford, I was one of those who regarded Berlin's lectures in the Examination Schools as a high point of the week).

The remarkable thing about Caute's fairly detailed narrative is that though it chronicles a very recent cultural history - only finally terminated by the collapse of the Soviet Union - it reads like a story of things that happened a long time ago and in another country. I am sure Oxford colleges haven't changed very much, nor the London literary world (even if the Times Literary Supplement no longer gives anonymity to its reviewers). But still ... Only right at the end of this book, when Caute sketches Berlin's distaste for Hannah Arendt, did I feel I was reading something fresh and interesting - and those were the quotations from Arendt which Caute provides.

When I first saw the sub-title of the book, "The Covert Punishment of a Cold War Heretic", I knew it would deal with the "Sussex Affair". I remembered that I had visited Tamara Deutscher and I was also sure (before opening the book) that Berlin had once told me that, yes, he had advised Sussex against appointing Deutscher - explaining that he was a member of an External Committee appointed to mentor (to use a word we would use now) the new University of Sussex. But I cannot recall any meeting with Berlin other than the non-adversarial meeting in 1967. It may be that I raised the Deutscher question then, even though it only got in to the public domain in early 1969 when Black Dwarf edited by Tariq Ali used the story. However, Caute does quote a 1969 letter from Berlin in which he says that prior to the Black Dwarf article, "I knew that there was some rumour among the students ...that I had somehow vetoed Deutscher, but this is perfectly false" ( p 283). So it's possible that I had heard the story in 1967 and asked Berlin about it then, in a context where he was not on the defensive - Phillip Hodson and I were in his rooms asking for his support and money for our magazine!