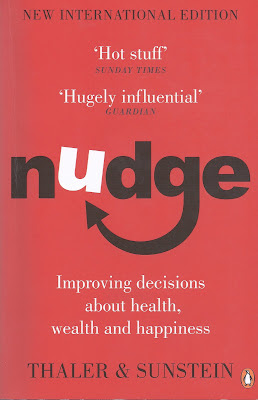 There are Econs. There are Humans. And there is America. We need to talk about America before we talk about Nudge theory.

America is in many ways a failed state. It is enormously wealthy but a large part of its population lives in poverty. Ordinary people work longer hours, take fewer holidays, are in more insecure employment, and get paid less than their counterparts in other wealthy countries.

It spends more - publicly and privately - on health care than any other country but gets a lousy return for the money spent.

An ossified Constitution exaggerates the fissures of a deeply divided society where lobbyists and fundamentalists (of whom there are many) can block even the most sensible changes. It is massively indebted, runs a structural deficit and has no Plan A or Plan B to get itself out of the mess. Tacitly, it relies on the goodwill of China to prevent total meltdown.

It refuses to check or even acknowledge what economists call Exernalitities: the harms some people do to others. So for over fifty years the conduct of the War on Communism, the War on Drugs and the War on Terror have subverted governments, destroyed law and order, trashed infrastructure, reduced populations to poverty, and created an incalculable toll of human misery. On every occasion, America has walked away - often enough, in demoralised defeat - and has never paid up for the catastrophes it has caused. The calculations alone are terrifying: try Joseph Stiglitz and Linda Bilmes: The Three Trillion Dollar War. The True Cost of the Iraq Conflict (2008)

What is true for foreign military adventures is true for domestic policy: though China now leads the way, America's tolerance over decades for domestic environmental pollution was simply a refusal to even acknowledge externalities.

Externalities - quantifiable "harm to others" in J.S.Mill's terms - get just a couple of mentions in Thaler and Sunstein's book (page 50, page 194). They limit their attention to fields where, really, since there are few if any externalities everyone can be a winner - and those who don't want to play can simply walk away. This is what they call "libertarian paternalism": the State nudges people towards outcomes which are in their own better (longer-term, rational, sensible) interests but does not punish them or make them incur costs if they choose to opt out. Instead, with the help of clever psychologists, governments set out to create a "choice architecture" which guides (or defaults) people to good choices and away from bad ones. Who could possibly object?

Well, in America, they could and that is part of the problem. Our two Professors of Public Policy are constantly looking over their shoulders for a negative reaction from the fundamentalists. (They don't even mention guns).

So it is really an achievement in the depressing context from which their work emerges that they have things to say which are relevant to public policy choices in countries less blighted than the United States - even if, in the case of the United Kingdom, it is not for want of trying.

All the stuff on Saving for Retirement, for example, relates to a topic of enormous importance and what they have to say is useful and practicable. Ditto for mortgages (and remember that the sub-prime mortgage crisis in the USA triggered the 2008 global financial crisis). But when you hit the chapter on Prescription Drug Insurance Plans à la George W Bush (Medicare Part D) you are into the kind of weird world which makes me think that the USA is the galactic twin of North Korea.

It's an easy read; it has its enthusiasts outside the USA (Mr Cameron, though I am not sure he could tell a Nudge from a Shove); and it is probably the kind of thing that die-hard command-and-control politicians like President Hollande should read, as a corrective to the natural habitus of their thinking.

_______________
Postscript: A while back on my General Blog www.trevorpatemanblog.com for 19 April 2012, I suggested that it would restrain democratic countries from wars of aggression if Campaign costs had to be funded from a separate War Tax imposed every time a country went to war. This would make the costs of war making transparent and remind voters who think of war as free prime time entertainment that it is not paid for from advertising or sponsorship but from their taxes. So I will now re-cycle this idea as an application of Nudge theory.