Review: David Satter, It Was A Long Time Ago And It Never Happened Anyway 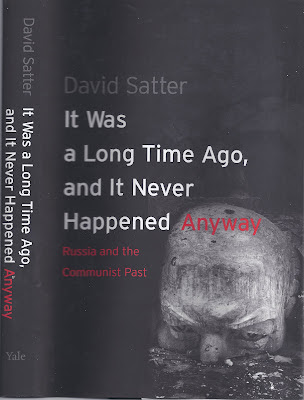 David Satter lives in Washington DC where the FBI has its Headquarters in a J. Edgar Hoover Building which retains its name despite the fact that Hoover was a serial criminal. You can, of course, read all about it in Anthony Summers, Official and Confidential: the Secret Life of J. Edgar Hoover and to an outsider it's very strange that the FBI is still determined to keep Hoover's name on the front door, despite everything. It's like they have never repented of the past.

This thought occurred to me when I hit Satter's brief characterisation of Stalin's KGB bosses: "Yagoda collected pornography, Yezhov was a promiscuous homosexual, Beria a serial rapist" (page 21). He complains that Russia has failed to come to terms with its past, whether through repentance or reconciliation, and part of the evidence for that claim is that there are still statues of the bad guys all around and streets named after them.

The problem is that if you divide the world into Them and Us - as Americans do and as Russians do (which is very convenient if you want to have a Cold War with each other) but as we all do to some degree - then you inevitably get double standards. President Putin never misses an opportunity to bang on about the West's double standards: Satter gives an example at page 213. Putin is quite often right.

So though I read this book while Pussy Riot were being sentenced in Moscow and had a strong disposition to agree with Satter's main thesis - which that Trial well illustrated - I also felt that Satter's book is not free of tendentiousness.

Satter's main thesis is summarised in his Conclusion:

Russia differs from the West in its attitude towards the individual. In the West, the individual is treated as an end in himself. His life cannot be disposed of recklessly in the pursuance of political schemes, and recognition of its value imposes limits on the behaviour of the authorities. In Russia, the individual is seen by the state as a means to an end, and a genuine moral framework for political life does not exist" (pp 304-05)

It is true that Russia has known very little except centralised and unaccountable power since the Romanovs consolidated their hold - next year, it's their 400th Anniversary. It is also true that the Russian Orthodox Church has almost always positioned itself as an instrument of state power, so that the potential for religious inspiration to provide a "genuine moral framework" has been lacking. (Of course, there have been heretics and schismatics in Russia, sometimes numerous; the Romanovs generally exiled them to the periphery of their domains, thus removing the contamination they threatened).

It's also true that Russia has never really separated State and Government. Interestingly, Satter himself never makes use of this distinction.

What do I mean by it? Institutionally, countries which have a largely ceremonial head of state make it easy for individuals to position themselves as loyal to the state but enemies of the government of the day. In the United Kingdom, the political party out of power is known as "Her Majesty's Loyal Opposition". It couldn't be clearer.

Likewise, any country with an independent judiciary provides its citizens with a potential source of values with which to oppose the regime of the day.

In Russia, the nearest equivalent to something supra-governmental is the idea of the Motherland which Stalin deployed to effect in World War Two, but which also potentially opened a space in which individuals could position themselves as loyal to the Motherland and hostile to the regime. But the Motherland was invoked at precisely the moment - the Great Patriotic War - when there was every reason to repress one's doubts about the regime in favour of the common struggle against an enemy actually worse than any caricature a regime propagandist could conceive.

If President Putin was reading this book, he would underline "life cannot be disposed of recklessly in the pursuance of political schemes" and comment, Vietnam? Cambodia? Latin America? Iraq? (And so that the Brits don't get off scot free, Diego Garcia?).In other words, "the West" defines rather narrowly which individuals benefit from being regarded as "ends in themselves".

In a rather erratic narrative which shifts between brief histories and contemporary journalism, Satter concentrates on the failure of the Russian state / successive governments to address the full horror of the Great Terror and the wickedness of the Gulag. He has interesting stories to tell about the activities of Memorial, and he travels well away from Moscow to document them. He charts the shifting responses of post-Soviet governments to demands for monuments to be put up or taken down and to demands to open the archives. He has interesting things to say about the Khruschev era and the Gorbachev years. He has one chapter (chapter 14) which reads likes special pleading for the CIA and which, had I been his editor, I would have challenged him to take out.

Though this book is published by Yale University Press, it's the foot-slog journalism which is its strength.

Email ThisBlogThis!Share to TwitterShare to FacebookShare to Pinterest
Labels: David Satter It Was A Long Time Ago and It Never Happened Anyway