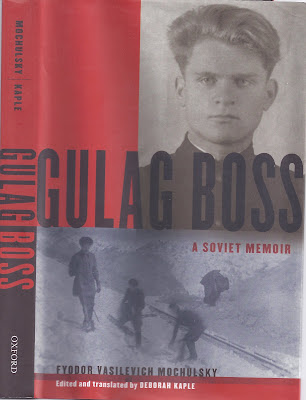 In 1940, aged 22, Fyodor Mochulsky, candidate member of the Communist Party, graduated from the Moscow Institute of Railroad Transport Engineering and - having rejected the offer of a graduate studentship in favour of "practical experience" - was assigned to work on the northern section of the railway being built from Kotlas to Vorkuta via Pechora. The rail link was being constructed so that coal could be shipped south from the Vorkuta coal mines and, in the context of a possible conflict with Germany, was regarded of great strategic importance.

The railway was being built by GULAG NKVD and Mochulsky became an NKVD employee, working inside the Arctic circle, foreman and boss over a prisoner labour force. He continued with this work until 1943, when he was (unexpectedly) moved sideways into Komsomol work with civilian employees along the railroad. After the war, he was re-trained as a diplomat and served in China and at high levels in Moscow. He retired in 1988, aged 70, and shortly thereafter - and it seems before the collapse of the Soviet Union - wrote out this Memoir of his Gulag years. Later, in the 1990s, he added further reminiscences (Part III of this book). At some point before his death in 1999, and having failed to find a publisher in Russia, he handed his manuscripts to Deborah Kaple and asked her to translate and publish them as she has now (2011) done.

I got the feeling that he has not been well-served by Kaple - and not just because of the delay. The translation of his Memoir quite often made me wonder what Mochulsky had actually written; and I found Kaple's Introduction and Afterword unimpressive.

Equally, it seems without a doubt that Mochulsky is not a good writer in any ordinary sense. But it is this which partly makes his book so interesting.

Right at the beginning of his professional life, Mochulsky is hauled up before a Party meeting for fiddling his very first statistical returns from his work Unit, for which it is proposed he should lose his Communist Party candidate status (p 43). He is allowed to offer a defence, and he gives an account of himself ( 43 -44) which repeats what he has already (32 - 37) told us: on arriving at his first assignment in the Gulag, he finds his forced labourers sleeping in the open air in Arctic conditions. And they are dying. So he suspends work on the railway for two weeks while the men build themselves barracks. At the same time, he continues to report upwards that track laying is continuing at the scheduled rate. Then when the barracks are built, the labourers work doubly hard for two weeks to make up lost output. Mochulsky continues to report normal output. By the end of one month, the books are balanced. But the daily returns have been faked and that's why he is in trouble.

Mochulsky escapes punishment because he gives a good account of himself. Nearly fifty years later, he again gives an account of himself in his Memoir - and I suspect he still has this idea that being honest and forthright is the best way to get yourself out of a fix, whether with the Communist Party or your soul.

When I read the opening narrative just described, I thought Mucholsky was going to use his Memoir to make out a case for himself as a Gulag Schindler, but he doesn't. At no point does he suggest that his actions are primarily guided by humanitarian considerations. Kaple writes, "His family says that he often spoke about the Gulag and his work there because the experience deeply troubled him all his life" (page XX). That is as far it goes. And Kaple also writes, "In his talks with me, Mochulsky stressed the importance of patriotism. In the face of a war on Soviet soil, he said, a patriot would do any job the government needed to be done, to win the war" (179).

His employers early on recognised that if you gave Mochulsky a job, he would get it done. Ironically, in the context of Soviet bureaucracy, Mochulsky gets things done not just because he is technically competent and hard-working, but because he is willing to take decisions and take risks. He uses his initiative. And this in a system which often penalises that. On one occasion, for example, he only gets to do what he thinks he should do because he signs a chit "stating that I had been warned of the dangers and that I took the responsibility for any possible consequences" (59) - most likely, getting killed.

I do not know if Mochulsky's account is "warts and all" but he does write about things which clearly - at the age of seventy - make him uncomfortable. He does not like the loss of self-control involved in drinking, for example, and stuck in the Gulag he is both sexually frustrated and curious about sex. But despite his reserve, he gives an account of these things and hopes for the best.

The awkwardness of the prose is one of the things which makes him quite endearing, as well as opening up many more avenues for reflection than a more polished performance would permit.

This book could be read alongside Orlando Figes, Just Send me Word, reviewed here recently. Both books are centred on Pechora and the Kotlas - Vorkuta railway. It would be good to have Figes' thoughts on the book now under review.