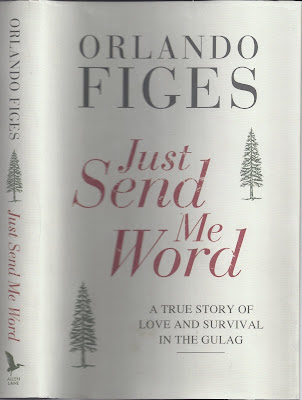 The backbone of this book is provided by long extracts from correspondence between Lev Mischenko (1917 - 2008) and Svetlana Ivanov (1917 - 2010) during the eight years (1946 - 1954) when he was a political prisoner in the Soviet Gulag and she a scientific researcher in Moscow. They had met before the War as students and were courting each other when Hitler's invasion of Russia separated them: Lev was captured by the Germans in the summer of 1941 and spent the War in German Dulags, Stalags and concentration camps. For that, he was then sentenced to ten years in the Gulag (Article 58 - I(b)).

He survived and Svetlana waited - from 1941 to 1954, with short annual visits to him (at first, unauthorised) from 1947. After Lev's release in 1954, they married, had two children (Svetlana by then an elderly prima gravida) and lived into their nineties. Their correspondence between 1946 and 1954 comprises 647 letters from him and 599 from her. It is now held in the archives of Memorial in Moscow and "is the biggest known collection of private letters relating to the history of the Gulag" (Irina Ostrovskaya, page 297).

The work of transcribing, translating and making sense of these letters should not be underestimated; it was surely an enormous undertaking. But Figes has also spent some time researching the archives of the Gulag network in the Komi ASSR where Lev spent his imprisonment in the Pechora Wood Combine.

I guess that those archives were also hard to make sense of and in wishing there was more contextualisation in this book, I am aware that it is not something which is delivered to the researcher on a plate. Of course, we have Anne Applebaum's massive book Gulag (2003), but still ...

On the other hand, Lev's letters posted outside the camp to avoid censorship do provide a mass of detail about his daily life - about food shortages, about brutality, about lack of health care, about bribery and corruption. There are even significant photographs, partly thanks to a former Pechora camp inmate, Lev Izrailevich, who after finishing his sentence elected to remain in the area as a free worker and, for prisoners, a valuable link to the outside world (see notably pages 95 - 97 for his biographical details).

The book is highly readable: it's an extraordinary love story and also a story of extraordinary luck. Lev had many talents, and those helped him survive, but he also had strong outside support from able people willing to take risks on his behalf. Even so, at any point, things could have gone wrong and quite often it was a close shave.

Lev's biggest fear was that he might be moved to a camp - say at the Vorkuta mines, just a little to the north of Pechora - where life would be harder, the regime more strict, the opportunities for enlisting the help of free workers to act as couriers much more limited, and so on. In those circumstances, his chances of living out his sentence would have been much reduced. Svetlana, as a Communist Party member and involved in "sensitive" scientific research, ran considerable risks in maintaining a relationship with a "political".

In fact, the main limitation of the book is that it is about people so hugely untypical. The Gulag was a machine for destroying people, either physically or morally. You died, horribly, or you lost your hope or your reason. That was a much more common outcome and those millions to whom that happened leave us no voice.

So though this book can be placed alongside Applebaum's on the shelf, it also belongs with Martin Amis's very well-informed novel House of Meetings (2006) which takes its start from the fact at the end of the 1940s (1950 at Pechora - Figes, page 207) some camps provided facilities ( Dom svidanii) for brief conjugal visits.

The legacy of the Gulag does not end with the deaths of the last of its inmates. Lev and Svetlana had two children. One of them, Nikita, was able and willing to co-operate fully with Figes (page 293). About the other, Anastasia, Figes says only that she "suffered chronically from bipolar depression and was unable to work" (page 284).
Posted by trevor pateman at 08:43