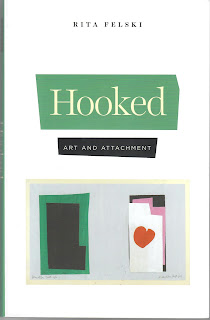 I was introduced to Rita Felski’s work in 2020 when I consulted what in England we call an Early Career Academic about an essay on Lolita that I was writing (now published as Nabokov’s Dream); he suggested I read The Limits of Critique (2015). In that book, Felski writes about the importance of the pleasure we get from reading novels or looking at paintings, and so on. In this new book she starts from a reflection on the often odd and idiosyncratic ways in which we become attached, or attach ourselves, to a work - maybe re-reading it frequently or humming the tune every day. (In another book I was reading recently, an anecdote was told about the philosopher Gilbert Ryle who was once asked if he read any fiction. Oh , yes. Jane Austen. All of them, once a year).

In Felski’s work there is a background hum of unease with what has happened to the humanities during her career and even before her career begun. Both institutional and broader cultural pressures have turned teachers of the humanities into purveyors of artificially narrowed pre-occupations often enough combined with a narrow-minded demand for conformity, usually in favour of some politico-cultural orientation deemed progressive but not always seen as such by outsiders. (So, for example, myself I see  the “critique” of cultural appropriation as both a bit absurd - because opposing itself to what is probably the main dynamic of all cultural change - and a bit backward-looking - which is to say, reactionary).

Felski occupies a prominent position in the academy and her own particular reservations (cultural appropriation is not something she discusses in this book, I should add, though it often involves getting hooked on something) are expressed in a more nuanced way than might be used by an outsider and perhaps some are not expressed at all.

Her response to claustrophobia is to try to open up the field of what can and should be done under the rubrics of “The Humanities” guided by a theoretical commitment to the Actor Network Theory (ANT) pioneered by Bruno Latour - who I haven’t read. But it seems that the slogan of ANT might well be, “Only connect!” Let me give an example of what might be involved in an ANT-ish opening up. (This is my own example and will show whether I have grasped the point or not).

Suppose we have hitherto worked on the assumption that response to a painting begins at the point when we stand before it (at an appropriate distance) on a gallery wall.  Well, how did we get to that Point? In the immediate past, we ascended the steps of what is probably an architecturally impressive building (that counts as an actor in ANT), passed through turnstiles and past security guards and gallery attendants (there are people who want to steal paintings because they are often worth a LOT of money and the guards remind us of that so they are actors too). We have  side-stepped other gallery-goers who may look older or younger than us, better dressed or worse, unevenly distributed by sex and ethnicity in ways which we may note as placing us in a majority or a minority. So many actors! Eventually, we get to the painting only to discover that twenty seven people got there before us. (Tourist tip: If you are thinking of visiting the Louvre to look at the Mona Lisa…well, Forget It).

All this contributes towards the state of mind in which you at last (hopefully) look at your painting, the identity of which you may now check against the gallery label (another actor).

All that has happened since you climbed the steps has gone into creating the state of mind in which you now stand before the painting. In addition, of course, there is all the preparatory reading you may have done about the painter whose work you are now looking at, or about the period or school within which they worked, and the title of the course requirement essay you have to write. What chance some supposedly pure unmediated response to what is now in front of you?

You might feel that your chances of unmediated response are better when you walk down the street listening to a new album through headphones until one song catches you and even hooks you enough for you to spool back and listen again. And perhaps again. This scenario is also capable of being written up in the terms of Actor-Network Theory,though it might seem that a sudden epiphany, a break -out experience in which you suddenly and unexpectedly attach to something with delight is actually a breaking out from your usual networks. Epiphanies could be described as an unlearning experience. (See footnote) .

Felski is particularly interested in this kind of experience and it explains the title of her book. She thinks we are often coy about admitting that something has hooked us, and especially so in a college classroom where to admit to such enthusiasms might seem out of place - a bit childish, perhaps; a bit down-market; a bit politically incorrect - there are now many readers, female and male, coy about owning up to  enthusiasm for Lolita, novel or films.

There’s not much to argue with in what Felski argues. But the danger - which she seeks to address - is that in place of scholarly narrowness and puritan exclusion we end up with seminar discussions of marshmallow softness, lectures which are hopelessly idiosyncratic (…if I may digress for a moment, I recall Bob Marley and the Wailers ... You what? Yes, it was their first UK tour (Awed silence).Yes, it was in 1972…. (long digression)), and books which though interesting don’t close in on any claims which might exclude other claims. And I’m not sure about claims which do not exclude other claims but rather seek to bundle them all up into a narrative which nods to every interested party.

I'm also doubtful that the dynamics of places like university seminars can actually accommodate every interested party: in my experience (and it may have been my fault) they tended to gravitate towards vicarage tea parties in which the tutor has fingers crossed that no one will say Fuck or take their clothes off (the latter once, the former more frequently).

I enjoyed reading Felski’s book. She has an especial talent for incorporating references to the literature - and there are many - into the flow of her writing, so that you are never confronted with Tombstone Quotes which always lead me to the thought that they might be skippable.

(Helen Thaventhiran writes an interesting review of Felski’s book in London Review of Books, 27 January 2022 and Rita Felski has a Letter in reply on 24 February).