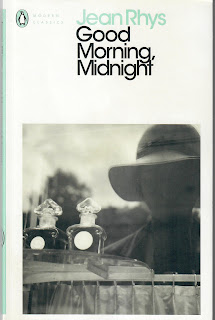 I think of Jean Rhys as an Expressionist writer whose short sentences are like bold brushstrokes in startling, unpredictable colours. It’s the kind of writing facilitated by having a bottle of wine or whisky or both beside you, and provides fresh supporting evidence for the old claim that in vino veritas.

In her writing, Rhys has to get past both internal inhibition and external censorship. In real life, she does things like taking money for sex which place her outside polite society  and into the demi-monde and she takes as husbands and lovers men who are accidental or professional criminals -  criminal enough to go to jail.

The alcohol helps her evade inhibition but the external censorship is evaded by literary crafting of a character sometimes described as obsessive. Whether the crafting was done drunk or sober I don’t know; either way, Rhys is a great stylist.

Good Morning, Midnight published in 1939 and set mostly in Paris of the period contains significant material written in French, not just in passages of spoken dialogue but in narratorial sentences written in a mix of English and French. Sometimes the French is left untranslated even (and especially) when the words are not ones which would have been learnt at school, like maquereau [pimp] at page 72. It’s not glossed though the context at least half-way enables a guess as to its meaning, “What she wants is three hundred francs to give to her maquereau. Will I give her three hundred francs for her maquereau?” Sometimes it is glossed but with a delay.

In one long passage which extends over pages 42 - 53 and is then picked up again at page 149, much is made of a contrast in register which could not in 1939 have been clarified with accurate English translations; the censor would have intervened.

Thus, a tall English girl who “speaks French very well” (page 38) looks at the narrator sitting in a café and exclaims, “Et qu’est-ce qu’elle fout ici, maintenant?” (page 39). The dictionaries, even supposedly modern ones,  are coy but this could be translated as, “What the fuck is she doing here, now?”, the fout being in the same register  as that in the common expression, Foutez-nous la paix! [Fuck off and leave us alone!]. Things change over time, and in the 1930s, maybe less forceful translations would be in order: What the hell is she doing …? Piss off.../Clear off … Rhys does not translate but instead writes, half a page later, “But what language! Considering the general get-up what you should have said was, ‘Qu’est-ce qu’elle fiche ici?’ Considering the general get-up, surely that’s what you should have said. What language, what language! What would Debenham & Freebody say, and what Harvey Nichols?”

But nothing has been translated at this point; the reader may be able to work out that ficher is less coarse / vulgar/ offensive than fouter but even though “Qu’est-ce qu’ elle fiche ici?” could have been glossed as, say, “What on earth is she doing here?” without troubling the censor, it has not been done.

But the theme is continued at page 42, where she adds an implied thought to the original and at last provides a translation, but a censored one:

“Qu’est-ce qu’elle fout ici, la vieille? What the devil (translating it politely) is she doing here, that old woman? …. I quite agree….I am asking myself all the time what the devil I am doing here”

That’s at top of page 42; bottom of page 43 the theme is again reprised:

The play with language then shifts at pages 44 -47 to simple repetitions in the key of Shakespeare. She starts with a half-allusion (“tomorrow, tomorrow…”) and then runs through “Back, back, back…”, “Hours and hours and hours”, “Courage, courage”, “Jesus, Jesus….Mother, Mother”, “Chloroform, chloroform”, “Back, back, back …” and several  more.

But fouter / ficher gets another outing at page 53, when a male acquaintance describes a friend he wants her to meet and sums up in untranslated French, “Mais au fond, vous savez, il s’en fiche de tout, il s’en fiche de tout le monde”. And the narrator then takes one line to comment, “He sounds fine” which in the context of all that has gone before ought to raise a smile.

Microsoft has had a field day with green and red squiggles all over this. I guess it struggles with many novelists. They do things differently.