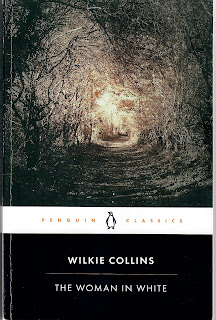 I admire Victorian novelists who scratched away with quills (later, steel pens) and candlelight to produce very long novels. True, the longer the novel the greater the income in a world where novels often began their lives in serialised, periodical, form before appearing as expensive triple-deckers and, eventually, as one volume popular editions.

The Woman in White runs to over six hundred pages in my Penguin Classics edition and at times the story feels as if it is being deliberately kept going. There are times too when the plot descends into plot summary, the inevitable consequence I guess of serialised publication which requires that readers be frequently reminded of what they had read in previous weeks or months - though that is  something which could have been edited out for a book version.  That said, it’s an extraordinary work and though advertised (on my Penguin cover) as in a Victorian Gothic genre,  it has the feel of a detective story complete with detective (Walter Hart in the right place), clues, plot twists, lures for the reader to wrap it all up, late revelations, and final triumphant success for the detective.

The plot is ingenious, the presentation of the unfolding story through the statements of a cast of witnesses innovative, and the suspense on balance well-sustained. As to the main characters, I found the villains rather more interesting than the heroes: Sir Percival Glyde and Count Fosco are complex figures who don’t react in stereotyped ways to the opportunities which present themselves or the changing predicaments which challenge them. To a lesser degree, the same is true of minor characters like Mrs Catherick.

The heroes are more stereotypical, though Collins offers fairly sustained alternatives to what I take as Victorian conceptions of femininity, notably in the character of Marian Halcombe, and there are what one might think of as authorial intrusions which underline the shortcomings of Victorian sex-discrimination, notably in relation to marriage and property rights. It would be possible to write a long essay on this topic, and someone probably has written one already.

Despite the fact that the lawyers consulted by the heroes are presented as good characters, one of the most interesting sub-texts of the book is a sustained scepticism about the capacity of the Law to deliver justice, promptly and fairly. Walter Hartright achieves what justice demands by extra-judicial means throughout and his menage a trois accomplice, Marian, cheerfully resorts to bribery in order to spring Laura Fairlie from the Asylum in which she has been imprisoned under a false name and under false pretences.  Whether this aspect of the novel shocked Victorian sensibilities I don’t know, though the best-seller success of the book suggests not.

In contrast, the system of property rights which frees one caste of people from the necessity of ever working - a privilege which provides endless occasions for inheritance disputes - attracts little scrutiny. Walter Hartight has to work for his living, but his achievement is not only to win  the woman he loves (and who loves him) but also restore her to her rightful place in the property order of things.

Email ThisBlogThis!Share to TwitterShare to FacebookShare to Pinterest
Labels: Wilkie Collins The Woman in White