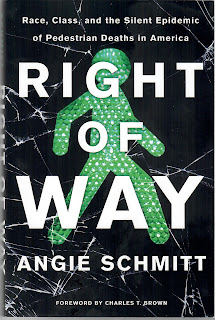 We Need to Talk About SUVs.

The United Sates is, apparently, very wealthy but on a wide range of well-being indicators it scores poorly. When the statisticians crunch the data it is always an outlier, as Kate Pickett and Richard Wilkinson showed in The Spirit Level (2008). Outside the USA, there is some general awareness of this: we sort of  know that American people experience gun violence, drug addictions, obesity, police violence, prison incarceration rates, mental ill-health, crumbling infrastructure, and all-round insecurity on a scale which makes for what some would call a shithole country. To make matters worse, a significant part of the population is now clearly beyond any ordinary appeal to reason, caught up in religious cults, conspiracy theories, and the more or less unhinged thinking of the Alt Right and at least some of the campus Wokes.

Any explanation is going to be complex but certainly lies deep in America’s dominant cultures. Angie Schmitt’s Right of Way is a carefully documented and modestly argued analysis which starts from a problem which does not make many headlines, pedestrian road deaths. In 2018, the USA boasted 6,283 pedestrian road deaths and around 1,500 further deaths involving a person and a vehicle in an off-road car park or private driveway. On a per capita basis, this is a poor result because it is about four times higher than equivalent deaths in the usual suspects for best performance, the Scandinavian countries.

As Schmitt painstakingly develops her account of underlying causes and potential solutions, it becomes (inadvertently) clear that America is stuck in some very hard to shift cultural assumptions and practices, many of which become fully articulated in its criminal justice system. A stand-out case is presented in chapter 3, “Blaming the Victim”.

Back in 2011, having missed a bus in her home state of Georgia, Raquel Nelson - a black woman - had to wait an hour for the next one. As a result, it was dark when she and her three young children alighted from the bus and set out to cross the four-lane highway which separated them from their suburban housing estate. Halfway across, her four year old son broke free of his mother’s hand to run with his sister to the other side. His sister made it, but he was hit by a van being driven at speed and he died. The driver of the van had vision problems, two previous hit-and-run convictions, and had been drinking on the day of the crash.

Outcome? The nearest crosswalk (pedestrian crossing) to the bus stop where she had alighted was a kilometre away, so Raquel Nelson did what everyone in her area did and crossed the road directly from the bus stop to her home. Big mistake. Jaywalking is an offence across the USA, an offence invented during the automobile's post - 1918 rise to dominance,  so she was charged with jaywalking, reckless conduct, and vehicular homicide. She was convicted of all three offences. The conviction was upheld on first appeal and on second appeal (made possible by a pro bono offer) to the Georgia Supreme Court.

The driver of the van, taking advantage of America’s eye-brow raising plea-bargaining system, pleaded guilty to fleeing the scene of the crash.

It would take a long essay to unpack all that is being illustrated by this single case. Schmitt uses it as a way of crystallising the argument that American culture, embodied in laws,  assumes that roads and streets exist primarily for drivers, and that it is the role of pedestrians (and cyclists) to stay out of the way. And not only that, that it is the role of pedestrians to accept Personal Responsibility for anything bad which might befall them.

In the United Kingdom, we have heard a lot about Personal Responsibility lately, some of it from our Ayn Rand-inspired GOP Health Secretary.

As Schmitt unfolds her narrative, it becomes clear that many parts of the USA simply do not have the kind of infrastructure anyone in the UK or mainland Europe will take for granted.  There are some simple but very tellling photographs.You cannot assume pavements or street lighting or pedestrian crossings or traffic calming devices or even safety regulations to reduce the design risk which vehicles pose to walkers. In the USA, they do light-touch regulation if you are wealthy and powerful and willing and able to litigate.

This is brought our forcefully in her discussion of SUVs. SUVs are pedestrain killers for two reasons. If an ordinary saloon car collides with a pedestrian, it will strike the pedestrian below the waist and maybe no higher than the thighs and will tend to throw them forward and onto the bonnet. This actually creates a survival chance. But the high-rise, flat fronted SUV will strike you above the waist, impact your vital organs - and knock you backwards so that it will then run you over. This reduces your chances of survival. That’s not all. High-rise SUVs have blind spots, fore and aft. A small child in front or behind a SUV will simply not be visible if they are closer to the vehicle than about three meters. Schmitt illustrates this with a photograph of seventeen children sitting comfortably on the ground in front of a stationary SUV, all of them within its blind zone. It is these blindspots which cause many driveway deaths, known in America as “Bye Bye” deaths because they often involve a young child waving to a departing parent or relative who reverses over them as they position their vehicle for driving away.

In the USA, SUVs now outsell saloon cars (sedans) heavily. Schmitt links this to an American sense that the whole world is hostile environment against which one needs to be armed and defended. A vehicle which derives its design from a military jeep or armoured car has a lot of appeal; some recent SUVs are advertised as bullet-proof, no doubt attractive for  mothers doing the school run.

But SUVs now play a significant role in the explanation for America’s high pedestrian fatality figures. The SUV problem has been recognised in other countries and regulations have obliged some design changes to the vehicles which  mitigate the problem; but such regulations are not to be heard of  in the USA. That would be too much like Big Government and Big GOP-funding Business wants government small.

There is so much more in this sober and sobering book. I guess the publisher wanted the sub-title, which is accurate but which may suggest to some potential readers that matters have been pre-judged. They haven’t; Schmitt is careful in her arguments because she wants to unite not divide her potential readers.  If you are appalled to the point of mental exhaustion by what you have been reading about the USA for the past five years and want a way into refreshing your understanding, I recommend this book.