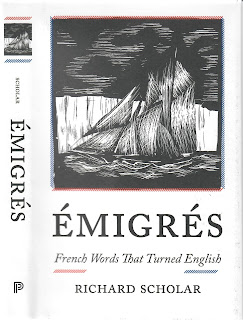 I saw this book advertised and bought it for two very local and immediate reasons.

I had been writing about emigration and exile and found that every time I used the word emigré Microsoft objected with its red squiggle. I didn’t understand why. I tried taking off the accent but when I did that Microsoft autocorrected to émigré. No, that’s wrong, I thought: emigré is a fully-assimilated loan-word from French and no longer requires the first accent, only the second which deflects readers from a spelling pronunciation. In the same way, we don’t write Hotel with a circumflex (no risk of mis-pronunciation) but do keep an accent on café (automatically supplied by Microsoft) likewise to deter a spelling pronunciation.

Microsoft also obliges with an accent on CAFÉ,though in French accents over capital letters are optional. For proof, google photographs of “typical Parisian café” - I will use the CAFE DE FLORE to prove my point.    In short, if someone asks you whether written English uses accents, the correct answer is Yes, but sparingly. And in French, Yes, but the rules are a bit different depending on lower case and upper case. But don’t ask me to be more precise because life is short. Anyway, I was curious about a book in English which signalled that it would take the Microsoft plus royaliste que le roi position (it has an American publisher, which may explain everything,  as we shall see later).

The second reason was another piece of writing in progress in which I was having fun with the very last of Vivian Darkbloom’s Notes to Vladimir Nabokov’s Ada or Ardor where Darkbloom glosses or translates the word gamine as lassie which I found hilarious until I discovered that there are real dictionaries which do the same, no kidding.[1]

Anyway, now to Professor Scholar’s book which isn’t quite how I imagined it but is nonetheless a very informative survey of the history of the partial assimilation / incorporation / …. of one expression and three words of French origin into written, literary English:  À la mode, Naïveté, Ennui, Caprice. (Microsoft now fails to autocorrect and does not provide an accent to À (Scholar does so I have copied) and simply squiggles red under Naïveté which I have also had to bring in line manually to Scholar’s preferred form. (Imagine there’s no loan words, it’s easier when you type ….)

Scholar sticks mainly to literary English and a historical approach to expressions which have stood the test of time but are not so fully assimilated as to no longer  carry any reminder of their origin in French. He is mostly concerned with written contributions to dominant cultures and so you will find here no parlay voos,  voolay voos, san fairy anns, ooh la las, excuzay mwas, comprenay? Nor are there any aperitifs, patays, creps or bonbons (that one now only a retro choice).

He is particularly good at bringing out how the use of a partially-assimilated loan-word can function to gesture to something ineffable or vaguer than a seemingly English equivalent, and ennui provides a good example. Similarly, such words may carry both positive and negative connotations and that may be something which can be exploited in a literary context. Of course, there will often be an element of showing off  and it is hostility to that which generates initial opposition to imported words but which, with the passage of time, no longer arouses  such strong reactions.

Scholar does introduce a theorising element in an endeavour to make sense of and generalise the detail with which he is concerned and he does this with the concept of creolization (which for me is now in free variation with  creolisation; Microsoft accepts both). A more obvious choice might have been cultural appropriation which appears only once (page 133) and I assume to the relief of his publisher, since Scholar’s book celebrates it. (I think cultural appropriation is inevitable and that people should get over it and start enjoying the possibilities it opens up, both ways: subordinate to dominant, dominant to subordinate).

But creolization doesn’t quite work. It already carries baggage which makes it difficult to fit in to Scholar’s argument.

Linguists have categories of trade jargons and pidgins which provide for limited forms of communication. They are found not only on slave plantations but in  ports and trading centres and do not imply any particular relation of power. So, for example, Russenorsk [Russo-Norwegian] was once used among people who were basically equal as traders or whalers. Importantly, such trade jargons and pidgins are created by and used by adults and generational transmission within a family may be limited or non-existent. Some of them have been  extremely limited in geographical and temporal extent like another jargon or pidgin from the Russian far north, Solombala English, which has a Wikipedia page but about which very, very little is known.

But on a slave plantation (to take the central case) a pidgin used for Master-Slave practical communication can evolve rapidly into a much richer creole driven by children from different language backgrounds who need  to communicate with each other about a wide range of topics. The speed of development is enhanced by the simple facts of short life expectancy and accelerated transitions from childhood to adult responsibilities. In this context, parents are not teachers nor do they possess normative authority because they (literally) do not understand their own children - rather in the way that in our own societies children run ahead of their parents in the social media and computing skills which they need.  Creoles are the creations of children who just want to be able to talk about anything and everything with members of their own generation. They are entirely oral creations. But within a few generations a pidgin turned creole can then be given written form and turned into a fully-fledged language with norms - in some cases, even into a national language like Papua’s Tok Pisin - which you can indeed translate as Talk Pidgin but it is now an official national language with a written form and sufficient syntax and vocabulary, and so on.

This assorts badly with the kind of reflexive, knowing borrowings and incorporations with which Scholar is concerned. These are late enhancements to fairly fully-fledged languages. Normative considerations are always in play and so too is power and prestige. One could  talk about cultural capital, a concept of fairly recent and French origin in the work of Pierre Bourdieu who does not appear in Scholar’s book.

Both cultural appropriation and cultural capital as concepts / theories allow one to explore the fact that what Scholar calls creolization is often marked by notable antagonisms. He acknowledges the reality of this repeatedly, quoting from authors who want to resist the invasion of foreign words into their native language. Such active and reflexive conflicts (culture wars) are rather different to more passive and inevitable processes which do exist and which can be talked about in the neutral language of “contact”. So Scholar is not wrong when he  writes of “those words that come into the language from outside and  turn it in new and unexpected directions” (page 169) but such passive processes are only half the story, as he knows and documents. Some things get into our language under the radar, but not all and those which don’t are the only ones talked and written about - until much later when historical linguists start to reconstruct broader histories, and attempt to look under the radar.

Added 9 November 2020: In a structural rather than historical analysis one would try to locate an assimilated word like emigré in its semantic field. That would include words like immigrant, migrant, exile, refugee, asylum seeker. Almost immediately I find myself thinking that the word emigré is involved in at least two semantic oppositions. The first is a matter of social class: poor people do not become emigrés; they become one of the other things on my list (though not exiles). There are no emigré labourers, only migrant ones. The second is about allowing a certain amount of ambivalence. An exile is someone who was forced out of somewhere else and may not welcome the fact that they have ended up where they are. They may be grateful for being allowed in, but they would rather be back where they came from. In contrast, an emigré can at least half-suggest that they moved of their own accord, that they came because they thought they would find their new hosts more congenial than their old neighbours. They may be able to hint that they could have gone elsewhere and that, perhaps, you are lucky to be favoured by their presence. Of course, over time semantic fields shift and though the dimensions of social class and ambivalence may last for a long period, within the field subtle re-arrangements are always going on so that to call someone in 2020 a Russian emigré will carry different connotations to those the expression would have had in 1940. And does a Russian oligarch who makes their home in London need any further characterisation beyond being called an oligarch? Are they outside the semantic field I have just sketched?

The American publisher. American presses have a bad reputation for wanting to dumb down books for what they assume is a dumb audience; I have written about this[2]. It often involves adding explanatory glosses; for example, at page 114 of this book I read, “The French-speaking Genevan thinker and writer Jean-Jacques Rousseau (1712-78) …..”.

The author could have pointed out that this is not a junior high school text and that anyone mad enough to read a book about “French Words That Turned English” would probably know Rousseau basics.

It’s not always easy to make the right judgment call. The editorial re-writer sometimes disappears when perhaps more needed. So at page 162, the title of a sequence of poems is given in untranslated French with no footnote that the words are those which the French-speaking painter Paul Gauguin (1848 - 1903) inscribed on perhaps his most famous painting. Now that is 101 stuff and might have been rather more worthy of the editor’s skills. But how come it was missed? There is no proper name in the immediate vicinity.

That is one reason why I have concluded - this is hot off the press -  that modern editors are using an App. which works by identifying  proper names and then inserts standardised patter on one side of the name and dates of birth and death on the other:

At least he is not English-speaking William Shakespeare, but this is still the language of an out-of-control App. as is evidenced by the double redundancies (playwrights/wrote ... plays;  such as/ for example). Authors sometimes need to take back control.