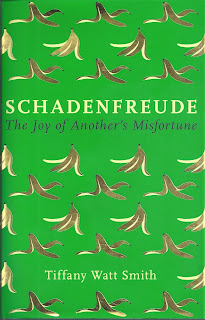 I bought this book on the same visit to Waterstones as yielded the previous book reviewed here, Darren McGarvey’s Poverty Safari. I was looking for short books that would take a few hours to read, having just failed to get stuck into two very long books which would each take twenty plus hours of my time.

But their brevity aside, the two books are chalk and cheese. If McGarvey’s is a working-class book, this is a middle-class one - very much so. McGarvey tells us about his sharp-edged anger at the world; Watt Smith about her sharp-elbowed envy and jealousy. It’s hard not to imagine her as someone who would have voted for David Cameron.

The book aims to be lightweight and one can imagine a great deal of it emerging from determined googling, examples and anecdotes - many of them amusing - piled up fairly haphazardly. Uncertainty about its intended audience gives us “The Genealogy of Morals written by the German philosopher Friedrich Nietzsche” (page 108), a bit odd in the context of a book which has a title in German, the English sub-title providing the translation.

More surprisingly, the book is the product of a Wellcome Trust research fellowship attached to the Centre for the History of the Emotions at Queen Mary University of London - that bit of the blurb, read in the bookshop, made me expect some Foucault but he nowhere appears and Watt Smith looks to American psychologists for inspiration. Those psychologists though themselves mostly university academics also aim to be popular, the sort of academics who now make use of the fact that the internet is made of tubes (page 113 for the Schadenfreude story).

The theme of the book is the joy we take in the misfortune of others. The author suggests that the emotion is natural, universal and often desirable despite its poor reputation. The concept of Schadenfreude has acquired fresh relevance in a world where social media allows many millions of people unrestricted access to express their uninhibited joy at the misfortunes of others, and I can see that there is scope to take that fact seriously and to seek to understand it, however distasteful the work may be. Fortunately for Watt Smith, she finds her Twitter feeds and such like exciting. De gustibus non est disputandum.