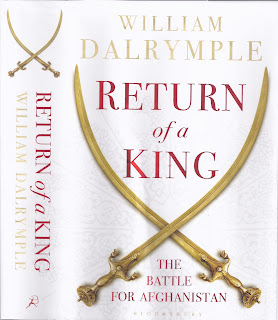 I hesitated over buying this book: Would I really commit to reading 500 pages on the first British Invasion of Afghanistan, way back in 1839. But then I remembered Dalrymple as a fine writer from one of his previous books, From the Holy Mountain, and I remembered that the Taliban remember all our Invasions. They provide the context in which the Taliban view our current stupidities, such as the deployment of a spare Princeling Harry - a move we make without thinking or caring that it will immediately revive memories of the past inglories of our ruling classte.

Dalrymple's book is about the first of those inglories. We invaded Afghanistan in 1839 to overthrow a ruler, Dost Mohammad, perfectly well disposed towards us. But a paranoid fear of Russian Designs on Afghanistan clouded our judgement. At great expense in men and treasure, we re-installed his predecessor, Shah Shuja, who had been our pensioner for decades. But though he was at least reasonably capable of ruling in his own right, we made him appear a mere puppet. At the same time, we failed to get our own act together militarily (Elphinstone) and politically (Macnaghten, Burnes, Auckland). Right at the outset, the rape of a young Afghan girl by a drunken soldier (pp 172 - 73) concentrated the minds of Afghans on what it means to live under Foreign occupation and, in due course and after other affronts, the clergy sanctioned a jihad for the defence of Islam. Dost Mohammad's son, Akbar Khan, proved a capable military leader and within a short space of time Shah Shuja, Burnes and Macnaghten were murdered and the Army of Occupation forced into a harrowing winter Retreat which few survived.

Unwilling to accept humiliation,  we started again in 1842 and sent in an Army of Retribution under Sir George Pollock with a mission to loot, rape and kill - and, as if that was not enough to satisfy our need for Retribution, cut rings around Afghan fruit trees. We had no intention to stay and occupy, but the new Governor General of India, Lord Ellenborough, gave Pollock's Army and that of General Knott, based in Kandahar,  permission to "withdraw via Kabul" (page 440). By the time they got there, most of the Afghan population had left to hide in the hills. So the Armies had to take their vengeance on the city itself, burning it to the ground; they also attacked the few hundred  pro-British Indian traders who had remained in the city, foolishly thinking that it was their Friends who were arriving.

Having ensured that the fruit trees would die, we left - and in due course, allowed Dost Mohammad to resume his interrupted rule. He reigned successfully until his death in 1863, securing what are more or less the boundaries of modern Afghanistan.

Dalrymple tells his story both from the well-known letters, diaries and historical narratives of the British (basically, English and Scottish) participants in the disaster but also from Afghan narratives, which he claims to be the first to utilise fully (see the "Author;'s Note" at pp.489 - 502). Quotations from these sources - often written in the form of epic poems - form a significant part of the book and throw into relief the lack of understanding, competence and clarity of purpose shown by the British leadership.

In the end, it was not difficult to read these 500 pages, sobering as many of them are. At the end, Dalrymple lightly sketches their connection to the failure of the latest invasion of Afghanistan.

Dalrymple has done a terrific amount of research to write this book, has written it well, and deserves to have a wide readership.