Review: Sigmund Freud, The Future of an Illusion 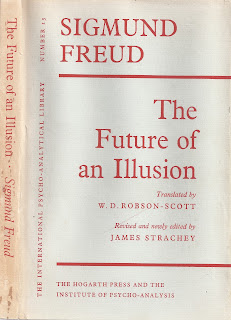 Fortunate the writer who today could command hardback publication for 52 pages of text. And which I would buy - as I bought this book in 1969, new,  for twelve shillings and sixpence.

Freud starts from a Hobbesian vision of the relationship between Nature and Culture:


It is remarkable that, little as men are able to exist in isolation, they should nevertheless feel as a heavy burden the sacrifices which civilization expects of them in order to make a communal life possible. Thus civilization has to be defended against the individual ... (page 2)

Not only that, but this business of defence requires two classes of citizens,  rulers and ruled:


It is just as impossible to do without control of the mass [Masse] by a minority as it is to dispense with coercion in the work of civilization. For masses are lazy and unintelligent ... (page 3)

At this point, the bells of political correctness would begin to ring in the ears of a modern editor. Thank you, Dr Freud, but this is not for us.

Get past this, and quite soon Freud is arguing that religious ideas have arisen "from the necessity of defending oneself [psychologically] against the crushingly superior force of nature" (page 17) though this narrow basis is later expanded to include other experiences of helplessness:


the terrifying impression of helplessness in childhood arouses the need for protection - for protection through love which was provided by the father; and the recognition that this helplessness lasts throughout life made it necessary to cling to the existence of a father ... Thus the benevolent rule of a divine Providence allays our fear of the dangers of life; the establishment of a moral world-order ensures the fulfilment of the demands of justice, which have so often remained unfulfilled in human civilization .... (page 26)

But since wish-fulfilment of this kind plays such a prominent role in the origin of religious ideas - which are, in their nature, not susceptible to proof or disproof - then they are properly called illusions. Hence the title of the book.

And Freud thinks we would be better off without them, trying to accept our helplessness but, at the same time, realising that scientific progress can do much to mitigate it. It is simply a more dignified way of living.

There is a separate line of argument which emerges at the end: religion is actively bad for us:

Think of the depressing contrast between the radiant intelligence of a healthy child and the feeble intellectual powers of the average adult. Can we be quite certain that it is not precisely religious education which bears a large share of the blame for this relative atrophy? ...Is it not true that the two main points in the programme for the education of children to-day are retardation of sexual development and premature religious influence (page 43)

I would come at matters rather differently. Freud's "religion" is ill-defined and he makes no use of an obvious distinction between  religion as ideas, feelings, experiences in the mind of an individual and religion as organisations with buildings, bank balances and bureaucracies. We suffer from both, but more particularly the latter.

Faced with allegations of abuse, for example, a Church behaves like an oil company looking at an oil spill. First, it denies that it happened. Second, it says it was a very small spill. And, third, it tries to minimise its financial liability by hiring lawyers adept at achieving such minimisation. If it thinks it is dealing with a weaker victim, then it simply bullies. In the very recent past, for example,  the Vatican decided it did not have to co-operate with enquiries in the much-abused Republic of Ireland. But it misjudged, was savaged, and responded with much gathering up of Nuncio skirts. The end result? The Vatican has recruited some new PR people.

We know a lot about the Roman Catholic Church, even though it seeks to shroud things in secrecy. How much less do we know about Jewish or Islamic religious organisations - their funding, their operations, their internal disciplinary procedures, and so on. As for the one-man Churches created by American tele-evangelists - well, I suppose we do know that they are either financial scams or swingers' clubs: we may just not know which.

What we do know about the average religious organisation ought to lead decent governments to take an arm's length approach: keeping them out of  schools, hospitals, prisons; not favouring their representations over others; not giving them tax breaks ( remember that only recently Berlusconi did that to buy the Church's indulgence; it worked).

As Lenin once said of his opponents, Don't listen to what they are saying; watch what their hands are doing.

What sustains an individual privately, in good times or in adversity, is no matter for states and governments. Even a good friend will hesitate to call someone's illusions illusions. But the public world of buildings, bank balances and bureaucracies - that is very much public business.

Email ThisBlogThis!Share to TwitterShare to FacebookShare to Pinterest
Labels: Freud Future of an Illusion, Marx Opium of the People