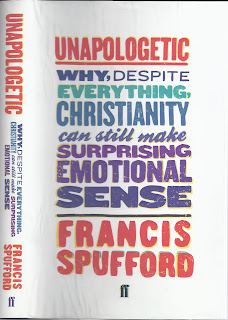 "My daughter has just turned six. Some time over the next year or so, she will discover that her parents are weird. We're weird because we go to church" Thus Francis Spufford's opening sentence. It made me think back to the time when my daughters discovered that their parents were weird: they didn't go to church - except, of course, for the School Carol Service. Not to attend that would have been cruel.

As I read on and into Mr Spufford's splendid Trendy Vicar sermons ("Hey!" without irony) I continued to think of him as a parent - an emotionally exhausting one who always wants to choose the board game, and interpret the rules, and cheat.

In particular, he doesn't want to play any game selected by "Richard bloody Dawkins" (page 222). Here, I have some sympathy. I never finished The God Delusion finding it oddly random. And the question "Does God Exist?" doesn't really excite me. I can leave it to the academics. For me,  religious belief is more a moral than an ontological question. Spufford arrives at faith, "because it feels right" (p 68). To me, it feels wrong and that's how I arrive at unbelief. However tempting, one ought not believe. If a good God did exist, he (she, it - Spufford is Trendy on this point) would no longer wish us to believe in him; too many crimes have been committed in his name.

Spufford feels that God is willing to put up with the crimes committed in his name but, curiously, does also believe that God did once - and once only - feel the need to intervene in the slaughterhouse of history. Yes, Jesus.

At page 19 he says "I am a fairly orthodox Christian" letting us know that he's a bum on a Church of England pew every Sunday. But it is only later that we get the whole truth.

Freud remarks in a footnote that writers often hide their most emotionally charged ideas in footnotes. Turn to page 164 - 5 and read the long footnote there:

is the damn story true?... whether it actually happened. Well, I don't know. I think it did, miracles, resurrection and all. But I don't know. [However, one can't just] assume the untruth of the story's own contention that there is a maker of nature who, this once, was able to alter nature's normal operations


So Spufford is a Biblical Fundamentalist; he believes in the literal truth of Scripture, at the same time acknowledging that he can't prove it. (And also passing over bits of Scripture which don't appeal to him).

Before you allow him to change the board game, pause at this point to consider just one of the difficulties of this historical truth version of religious belief. It leaves all those unfortunate enough to have died before or been a long way away from "Judea, AD 33, teatime" (his quotation from Monty Python, page 160) out in the cold. No one came along to show them how to deal with their fundamental HPtFtU ( the Human Propensity to Fuck Things Up - the trendy vicar's substitute for "Sin").

Well, isn't that just a bit unloving? A bit careless? Did God wait until he was sufficiently pissed off by human behaviour to break his silence and intervene (in a rather odd way, it must be said) and just once .... You can continue the argument, I am sure. Whether Spufford would want to is another question.

He picks up the Problem of Evil and runs with it (pp 87 - 104), not unintelligently, then simply dumps it. It's hardly fair to criticise him for this since it's exactly what other writers do. Many years ago I read Professor John Hick's doorstop thick Evil and the God of Love , an academic work which also just runs away into the sand.

But in context it seems to me that in the end, Spufford just keeps changing board games, perhaps recklessly (a word he would regard as a compliment): he has a religious experience - feelings that there is after all something, that there is something bigger than him, that there are ground for hope, even that help is at hand - and that gets him into the C of E and onto Biblical Fundamentalism. It's all too rash.

Nonetheless, this is a better stab at doing theology than much of what I guess comes out of state-funded Theology departments, already dusty with such irrelevance that I am not the only one not to read it. There are some terrific things in this book and I am pleased to have read it. The modern life of Jesus, "Yeshua" which occupies chapter 5 is a brilliant piece of  writing -  the account of the Crucifixion is  moving.

And on one point of theology, we probably agree:

Paying attention is the natural piety of the soul (Malebranche). It may be helped when two or three are gathered together.

It does not require a State church and certainly not the one into which, back in 1947, I was baptized - my Godparents sent on their way with a little card headed "Take this child and nurse it for Me" and which reminds them:

1. To pray regularly for my Godchild.

2.  To ask myself frequently: Does my Godchild know, or is he being taught, the promises which he made by me [my Bold] at his baptism, namely: (a) To renounce the devil and all his works, the vain pomp and glory of the world, with all covetous desires of the same, and the carnal desires of the flesh? ....


And on that subject, Mr Spufford, consider what you say at page 218, "You can't be a Christian and hold that the ends justify the means". Isn't that what infant baptism and faith schools are all about? Getting hold of the children before they can feel and think for themselves so that they are yours for life - even if for a decade or two they go astray? 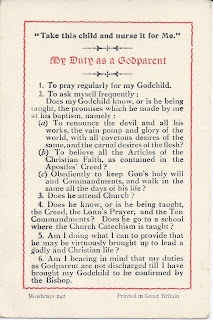