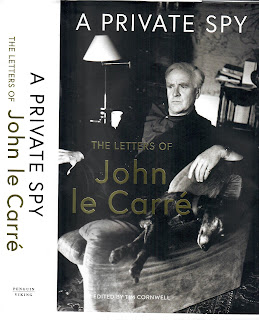 Browsing a provincial auction catalogue, some years ago, I noticed for sale an autograph letter signed David Cornwell on notepaper headed John le Carré. I was reading lots of le Carré at the time and, out of curiosity, bought the letter unseen. Forty quid. He writes to Stacey [there was no envelope so I have no surname] who appears to be laid up in hospital after an accident and asks for reading suggestions. The writer obliges: start with P G Wodehouse (“the funniest man ever”) and for fine writing head to Anna Karenina, Vanity Fair, and Ford Maddox Ford’s The Good Soldier. As if that’s not enough to be going on with, the writer then throws in The Three Musketeers and The Prisoner of Zenda. It’s all prefaced by advance notice for his The Mission Song, the galleys of which he is currently correcting. His full address in Cornwall is written in by hand and the letter dated 19:v:06. I was impressed. Stacey appeared to be a complete stranger who had written to a famous and almost certainly very busy author and received back a thoughtful, handwritten two-page reply.

In his Introduction to this very well-crafted collection of his father’s letters, the late Tim Cornwell indicates that his father was an (unusually) good correspondent, often replying to unsolicited mail and promptly (pages xxii-xxiii). He generally wrote by hand and often kept no copy. As a result, the le Carré archive in the Bodleian Library, on which this collection of over 600 pages is fairly dependent, will contain no trace of letters like that to Stacey and the deficit could really only be reduced by buying up such originals as appear on the internet, as they do. Sometimes the content will be of interest - as in the letter I have summarised - but, perhaps as importantly, those letters suggest what one could regard either as noblesse oblige or - and I incline to this - a rather democratic spirit. The latter interpretation is supported by what to me is the heartening fact that David Cornwell never accepted one of those tarnished medals handed out by our Monarch and which Woke novelists now declare after their names to show that they are Members of the Most Excellent Order of the British Empire. It is not as if he was opposed to all recognition:  he accepted, for example, a Goethe Medal in 2011 and a D Litt from Oxford.

In the book under review, le Carré does give reasons for refusing a CBE on the recommendation of Margaret Thatcher but the letter (at pages 238-39) is written to the then Head of Britain’s Secret Intelligence Service, Sir Dick Franks, and could be read as at least partly an effort to deflect any accusation of disloyalty to the Establishment. Much later, after le Carré has entertained the Russian Ambassador for a weekend at his home in Cornwall, he follows up with a report on the weekend addressed to Alan Judd, who has already been introduced in the editorial notes as a link-man into MI6/SIS (pages 387-396). Le Carré  expresses himself rather differently when writing to a friend, Sir John Margetson, in 2010: “PS. Did I tell you I passed on a K[knighthood]. All right for public servants, not good for artists, writers & the like”. (He’s right; I was disappointed when Kazuo Ishiguro accepted a K. Some way or other, it’s going to cramp your style).

In my own reading of le Carré’s novels I eventually got round to A Perfect Spy, wonderful on first read, not least because the narrative drive never lost out to a complex structure kept in place from start to finish. I was impressed enough to re-read and began to pick out literary devices which were being used but not pointed to. I found myself drawn to a one-liner attributed to a main character, “Never mind, E Weber love you always” which is repeated three times to great effect. I wrote a few hundred words about this and was quite pleased with the result. It occurred to me that I had John le Carré’s home address sitting in a file: I could send him what I’d written. It would be a bit cheeky: I would be evading the person in charge of the paper shredder in some literary agent’s office, employed to protect authors from crank letter-writers. But I sent it anyway.

To my astonishment, within a few days I had a handwritten reply (10th Feb 2017) in which I am told, rather teasingly, that I have caught something of the real person behind the character of E.Weber, “at her charming best”.

Writers do depend on encouragement, and I was encouraged to expand what I had written into a more sustained reflection on A Perfect Spy for inclusion in a book I was working on. And then I thought I’d go for broke: I wrote again to ask permission to include his letter in the body of my essay and, if he was in principle agreeable, to give me the necessary contact details for his agent etc.  Came the handwritten reply (25th July 2017), “…no need to trouble my agent: please regard this letter as consent enough”. And so the letter appears at pages 98-99 of my completely unsuccessful book, Prose Improvements (2017). I returned again to A Perfect Spy in a 2018 review on this site  https://www.readingthisbook.com/2018/07/john-le-carre-perfect-spy.html and, in contrast to my failed book, it’s one of the most popular pages here with over a thousand visitors.

The letters offered in the volume under review are to family, friends, lovers (though sparsely), secret and diplomatic service colleagues, fellow writers, agents, and so on. There are a handful addressed to what one might call members of the public: to Mrs Betty Quail who thinks that George Smiley’s problems would be solved by conversion to Catholicism (p 230); to a ten year old boy who wants to be a spy (p 281) and another to an eleven year old (p 359); to attentive readers in the Netherlands and Germany who have spotted plot impossibilities and inconsistencies (p 336, p 354) - the first one a beauty in which the Emperor is clearly caught with no clothes; le Carré is greatly amused and sends a signed hardback as a prize.

But these letters feel like curiosities alongside the more weighty correspondence, some of it providing useful grist for those who want to study plot and character and device in the novels. This is very obviously so in letters to Alec Guinness where le Carré is  clear and detailed about how he thinks George Smiley should be played (notably pages 211-15).

To my surprise, it was easy to read this book rather than pick up, put down, and basically browse.. A lot must be owing to the skills of the editor, le Carré’s son the late Tim Cornwell, who structures the book around the major novels and provides helpful, unassertive, notes of guidance. If there is a weakness it must (inevitably and invisibly) rest in the fact that the compilation is a family affair, approved by the family Estate, and appearing really very soon after le Carré’s death at the end of 2020.

Like father like son. I was struck by the similarities between father and son. Both display extraordinary energy, are on the move constantly (though le Carré likes to describe himself as a recluse in Cornwall - with a guest wing built to accommodate six …), and are good at making friends and influencing people. The difference, of course, is that Reggie was a career con-man criminal notching up jail sentences in several countries (not many criminals achieve that distinction) and losing his winnings every time, whereas le Carré amasses - and doesn’t lose, though sometimes gives away chunks -  a large fortune built entirely on his genius as a writer and the skill of his agents in selling film and TV rights.

There is hardly a page in the 630 pages of this collection of letters where the author is not busy, whether writing, travelling to dangerous places to do background research for a novel,promoting a new novel, or co-operating with scriptwriters, directors, producers. Both energy and achievement are extraordinary.

I will do my duty and make copies of the letters I mentioned at the beginning and post them to the archivist at the Bodleian.