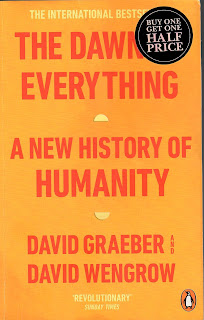 Ten years ago I reviewed David Graeber’s Debt on this site and declared it my Book of the Year, though that is a fact I had forgotten until I accessed what I had written:

The book now under review, jointly authored with the archaeologist David Wengrow, was completed a few weeks before David Graeber’s sudden-onset illness and unexpected death in 2020. Like the earlier book it is enormously wide-ranging, disruptive of settled notions, and engagingly written. I was impressed and greatly enjoyed it.

A thumbnail will not do it justice so I will not struggle to find the most apt one. It seeks to re-fashion how we think about both the very distant past with which the archaeologist is concerned and the scattered “left-over” presents which are the concern of cultural anthropologists. Specifically, it tries to escape from the clutch of all those (teleological) approaches which assume that their job must be to explain how we got from there to here. At the same time, it suggests that despite lack of written evidence we should not assume that pre-historic or tribal cultures were incapable of thinking about the arrangements under which they lived and making use of that in configuring and changing them. At a level of  more detail, instead of going in search of “state formation” starting from our current situation in which the world is carved up into nation states we could usefully look at how at different times and places three principles of domination are exercised, either alone or in combination: “call them control of violence, control of information, and individual charisma” (page 365). This opens up a field normally dominated by thinking about monopoly of force or private property rights and allows us to see past societies and marginal societies in all their difference. The professors will soon tell us if they think this is or isn’t an insightful way of developing a new approach within social and political theory.

I offer only two small comments. The authors make much of the fact that pre-historic and tribal societies quite often live under different forms of government at different times of year. In the hunting season, everyone may submit to a single leader whose word is law; but in the off-season when people settle (back) into village-like life, everyone may prove very reluctant to submit to anyone else and indeed decision-making may be quite differently organised in terms of communal discussion aimed at consensus. The mere fact of this seasonal difference opens space for local reflection on which system is “best”. The authors seem to think that this will come as a surprise to readers. But most of them will have had recent experience of COVID lock-downs, some will have had experience of Martial Law, and in my country many will know about the Emergency Powers which in World War Two underpinned such things as the compulsory night-time blackout. In all these cases, people don’t move around geographically but the rules under which they live have been temporarily, but quite dramatically, changed. Except in the case of Martial Law, compliance may depend a lot on the sense that “We’re all in it together” as Britain’s former Prime Minister Mr Boris Johnson discovered to his cost. He let it be discovered that in his view COVID rules were only for the little people.

As a second comment, the authors frequently use concepts of culture, civilisation, state and society but I miss civil society. Civil society is something which is outside the private sphere of the family unit but also outside the state and its bureaucracy. It is larger than what Habermas and others would call the public sphere construed as a place for public debate and would include things like food banks which are created by the voluntary efforts of (private) citizens. The scale of civil society is variable - totalitarian regimes are deeply suspicious of it as a site of potential opposition and will seek to incorporate most of its elements into bureaucratically controlled state or quasi-state activities. In countries like my own there is also perhaps an interesting question about its boundaries. For example, food supermarkets might be located simply in the domain of capitalist enterprises, driven by the aim of profit maximisation and so on. But for whatever motives they do have aspects which link them to civil society: they give away food which might go to waste; they stock shelves with “Value” and “Essential” products which are cheaper and which increase in importance in periods of inflation and recession; they articulate discontent with government - in my country the Chairman of Tesco, a major supermarket chain, recently let it be known that he despaired of the Conservative (and supposedly business-oriented)  government and was looking forward to a new (Labour) one. I don’t want to be starry-eyed but I do think there is something to look at there a bit more closely. There is of course an enormous amount of guff pushed out about “socially responsible business” but maybe it does a bit more than blur the line between ”the Economy” and “Society”. I'm tempted to say that often enough it is civil society which mitigates the mistakes and oppression of nation state governments.

Email ThisBlogThis!Share to TwitterShare to FacebookShare to Pinterest
Labels: David Graeber and David Wengrow The Dawn of Everything, Review David Graeber Debt