Benjamin J B Lipscomb The Women are Up to Something. 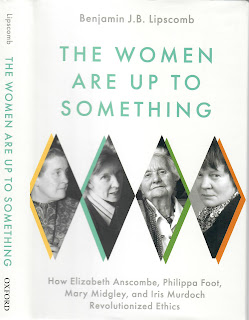 This book is better than its rather desperate American titling - it's published by Oxford University Press America rather than OUP Oxford and that is relevant. It’s fluently written and readable, making no great intellectual demands. But it will also help, I suspect, if as  reader you are rather over-awed by OXFORD, a place you would never dream of calling Oggsford or Oxfraud.

For his American audience, Lipscomb provides an accurate, lucid guide to how the University is organised - the collegiate structure, the tutorial system, methods of examination in Arts subjects, character of the degree courses, and so on. But he doesn’t see that many of these things have their downsides nor does he see through the mysteries.

The college system, for example, has always allowed for the creation of backwaters of one kind or another where students may get a poor deal, academically, though the accommodation and the food and the team sports may be good. The colleges have been clublands and their Fellows often enough people - historically, all male and until recently bachelors - only too happy to settle down to a life-time of boarding school existence with the usual private languages, arcane rituals, insider dealing, and hysterical feuds - the latest 21st century one at Christ Church, very obscure and lasting several years, has used up a great deal of money from its supposedly charitable funds and diverted the energy of Fellows from their proper work.

Lipscomb makes sustained early reference to the use of unseen written examinations as the basis on which scholarships, prizes, and degree classifications are awarded and is clearly awed by the thought of how brilliant the scripts must sometimes have been. He is not the only one: Oxford philosopher Michael Dummett seeking to explain (many years after the 1941 event) how Elizabeth Anscombe got a First Class degree in Literae Humaniores (Classical Studies) despite History papers which were indifferent or bad says to an interviewer, “her philosophy papers must have been astonishing” (p 73). The truth is, we can’t know whether they were or not because all those unseen hand-written examination papers, scribbled under invigilated time pressure in the Examination Schools, were burnt very soon after the event. And until recently, no external examiner would have had a chance to look at them before bonfire night since OXFORD saw no need for external examiners. From the nineteenth century on it provided them to upstart provincial universities who, of course, needed to be policed. (By the way, Oxford is not in London; it’s in heartland Church & King provincial England, but don’t mention that …). Anyway,  we can’t know how astonishing some of this student scribbling was; none of it was ever published to show what a Model Essay might look like. In Anscombe’s case, all it took for her to get a First Class degree - against the norm that to do that you had to show some merit in all your papers - was for the Philosophers to outvote the Historians on the Examination Board and leave them to grumble later over the port.

I discovered about the burning in 1967. I had sat for a university-wide undergraduate  prize in Economics awarded on the basis of the usual timed examinations, answering previously unseen questions. One paper required that just one question should be answered in the three hour time allocation. I wrote an answer to the question, “Is Economic Growth a Good Thing?”  - precisely the kind of “general” question in which Oxford specialises and about which Lipscomb writes several times. I was pleased with what I had written - it must have run to three or five thousand words. So when I got the letter telling me I had been awarded the prize (worth about twenty percent on top of my total annual income) I wrote asking if I could have my script back because I thought I could work on it and improve it. Back came the reply: It’s already been burnt. So no one will ever know how astonishing (or not) it was and don’t ask me because I don’t know either.

(Imagine an Art College where the drawings and paintings submitted for your Degree Show were assessed and then burnt).

You might say that the mysteries of Oxford are those of a literate culture which has never placed high value on the written word, and preferred oral debate, oral traditions, and gossip in the cloisters.

Lipscomb is good when he situates the formation and rise of his selected Quartet of female philosophers in the context of the Second World War. Though the four have been selected as a friendship group all born in 1919 - thus completely excluding their near contemporary, Mary Warnock, born in 1924 and also a noted Oxford moral philosopher - the four were part of a war-time cohort of female students who benefitted from the sudden disappearance of all the young men sent off to war. Only the men who were old, infirm, or claimed to be especially devoted to doing God’s work, remained. As a result, the proportion of female students increased to the extent that they were no longer a marginal presence, living in out-of-town poor colleges where the food and the wine cellar had never been up to much. But the women's colleges were probably more meritocratic than the men's - where birth and private school attended counted for more - with Somerville possibly the most meritocratic and Lady Margaret Hall the least among the women's colleges. But I don't have data and I don't know if they exist, though schools attended are probably reconstructible for many cohorts from even the distant past.

The war time female students got better tuition than normal since there were underemployed college tutors all over Oxford.  Lipscomb documents their access to well-above-average tutors, notably Donald MacKinnon. He was a talented and charismatic figure and female students who had the hots for him could and did disguise their infatuation as enthusiasm to join him in a religious Quest.  Much more exciting than having an affair with a married man. (Lipscomb documents it in the case of Iris Murdoch but is less cynical about it all than MacKinnon’s wife was, or I am).

It’s because they are all dead that Lipscomb can write about such things and include the scurrilous anecdotes, notably those which feature the eccentric Miss Anscombe, mother of seven children by her husband, Peter Geach. Anscombe and Geach were Roman Catholic converts of the More Papist than the Pope kind - some of it really quite inhuman. The message got through to their children, at least according to the one anecdote I recall from my time in Oxford (oh, it’s apocryphal and false, of course, of course): A new babysitter had gone to the house one evening to look after the children; left alone with her, they lined up to declare: You can’t tell us what to do. We are the Anscombe - Geach children.

Pulling rank was not the preserve of children and it did happen too among marginalised female philosophers. But the men were clearly worse and Lipscomb shows the Great Men of the time behaving badly, though not necessarily atrociously so and not always without provocation: J L Austin, A J Ayer, R M Hare, Gilbert Ryle …. The way I look at it some of these figures, both male and female, were indeed  important cultural figures whose work has been influential and will continue to be read in different cultures. Austin and his colleague H P Grice (who doesn’t figure in Lipscomb’s narrative) were the inspiration for a whole new world-wide scientific approach to language, language pragmatics, and are read as such now. So their work eclipses their time, their personal weaknesses, and their eccentricities.

But some of them were simply big fish in a pond smaller than they imagined. Oxford in the past was  a small university, reflecting the fact that only a very small fraction of each age group in Great Britain proceeded to university education, maybe 3 to 5% - it was 5% as late as the early 1960s as far as I can establish. In the sciences both Cambridge and Oxford were world leaders from early in the twentieth century. But in the Humanities the stand-out figures are few, the most obvious being Wittgenstein who though eventually a Cambridge professor was an institutionally marginal figure. Anscombe  succeeded to the same university chair and kept up the tradition of personal eccentricity and obnoxiousness. But though a significant figure in twentieth century British philosophy with three volumes of Collected Papers published in the 1980s, is she more than that? And as a Roman Catholic thinker?

Email ThisBlogThis!Share to TwitterShare to FacebookShare to Pinterest
Labels: benjamin lipscomb, benjamin lipscomb the women are up to something, Oxford examination systems, Oxford University in second world war, Somerville philosophers