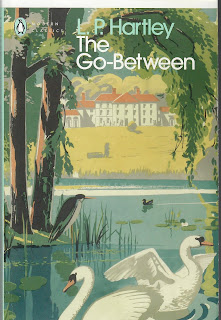 I admire novelists who manage both to take their time in telling a story but also  manage to meet the common expectation of readers that the story should have some pace, however measured,  to which they can respond. Among contemporary novelists, Kazuo Ishiguro pulls it off wonderfully, most obviously perhaps in The Remains of the Day (1989). L P Hartley’s The Go-Between (1953) shares with that book both its retrospective character, a first-person narrator revisiting the past, and a pace which is both leisurely and engaging. That is structurally visible in the short chapters: twenty five of them, including Prologue and Epilogue, which occupy 255 pages in my Penguin edition. The trick, I suppose, is to introduce some significant new material into each chapter - something which Victorian novelists writing for serial publication were almost contractually obliged to do. So much the better if new material layers onto the older, so that character or plot develop - Ishiguro manages this in such a way that his endings are rather like musical finales where everything comes together.

Hartley’s book reminded me of What Maisie Knew. It’s true, the first person narrator is telling his story fifty years after the events it chronicles but for most of the time allows this to be forgotten and offers up  to the reader the world of a twelve year old boy who doesn’t fully understand what is going on between the adults around him and - for much of the time - the go-between role in which he has been enlisted. What is going on is a relationship in the same category as that between Lady Chatterley and Mellors, but I got no sense that Hartley was trying to allude to or invoke that literary fact.

Set in 1900, the tone is nostalgic with the usual props of the English countryside, stately houses, public schools, cricket matches, servants, and people who have no work of their own to do - still going strong in fine novels like Graham Swift’s Mothering Sunday (2016). Hartley’s Go-Between is also a very fine novel.

Email ThisBlogThis!Share to TwitterShare to FacebookShare to Pinterest
Labels: L P Hartley The Go Between