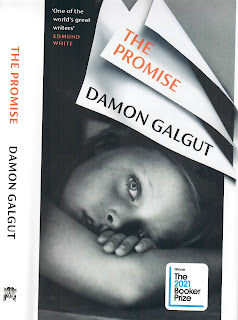 It felt like the triumph of hope over experience when I picked up this Booker Prize winner from the Waterstones table. After the disappointments of Bernardine Evaristo (Girl, Woman, Other reviewed on this Blog 20 March 2020  ) and Douglas Stuart (Shuggie Bain, 21 January 2021 ) the odds were surely stacked against a really good novel. But, as it turns out, this one is and I recommend it.

It’s probably a commonplace that deaths and funerals and wills reveal the fault lines in family relationships; rather than creating the solidarity you might expect, they seem to do the opposite. People fall out with each other, vow never to speak again - at least until the next death if it’s not their own. Damon Galgut has seized the potential of these familiar thoughts and builds his novel around deaths in the family, adding in for good measure excruciating bit parts played by funeral parlours, ministers of religion, and lawyers who draw up the wills. Though the deaths are spread over decades, the thematic focus on how family members respond holds the novel tightly together with a relatively small (and diminishing) cast of characters.

At the same time, Galgut quite subtly provides a background of South Africa’s passage from apartheid to black majority rule and the ways it affects -and doesn’t affect - life in a farmstead-based family in rural Afrikaans-speaking Transvaal. The Promise of the title is a real promise held out to a black family servant but the fulfillment of which is avoided for decades and not achieved until the end of the story. Nations are rarely one big family - and if they are, then like ordinary families they are sure to have their fault lines.

The prose is tight and the dialogue spare and sharp at the same time. There’s not a lot of laugh-out loud humour nor is there really any invitation to grief when characters die. It’s not a book in which there is sunrise and sunset; more a long saga with no obvious resolution but a great deal of very thoughtfully presented story.