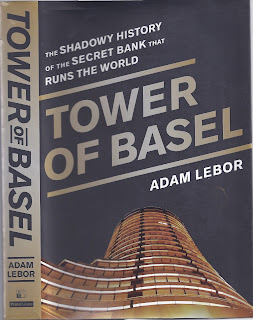 This book is part muck-raking journalism, part serious study and not always easily combined. It's credibility isn't helped by the poor quality of the proof reading - nowadays with so many unemployed graduates competing for work, you just don't expect to have to deal with typos. in the books you read.

It's subject matter is the history of the Bank of International Settlements, the BIS, an extra-territorial organisation physically located in Basel. It was created in 1930 as a bank for central banks and central bankers. The shareholders were the central banks, the number of whom belonging to the organisation has increased over time. It has always been extremely profitable, holding and moving around large sums of money for a very small number of institutional clients - Lebor gives a figure of 140 at some point. It co-ooperates with the Swiss National Bank - for example, using that bank's secure vaults to store the gold it holds on deposit. But Switzerland has no jurisdiction over the Bank and the bank's employees don't pay Swiss taxes. So it enjoys the kind of privileges a foreign embassy would have.

The muck-raking part of the book charts how the Bank developed through the 1930s as an instrument of Third Reich policy, to which the close relationship between Hjalmar Schacht of the Reichsbank and Montagu Norman of the Bank of England was essential. And when War came, though professing itself  "Neutral", the bank - like "neutral" Swiss banks - co-operated in handling looted assets - particularly gold. Even at the time, this became a scandal: there was an outcry when it was discovered that the BIS had transferred the gold deposits held in Basel by the Czech National Bank to the Reichsbank. The BIS said the Czech Bank had asked it to do this - but since Germany had just occupied Czechoslovakia and was pointing the guns, everyone knew that the Czech Bank was acting under duress. The BIS did not regard that as relevant - though the outcry did lead it to take a different line when the Soviets asked for the gold held by the Baltic states. That gold was frozen in Basel until the Soviet Union disintegrated and the Baltic States re-emerged as independent countries.

Perhaps more interesting is the way Lebor documents the way in which some Nazi thinking about post-war Europe - in which they assumed themselves the winners - anticipated the main lines of the integrationist policies which have been pursued since 1950 when the European Coal and Steel Community was created. That thinking was never abandoned: when German bankers and industrialists began (around 1943) to plan for a post-War in which Germany was the loser, they stayed with the integrationist idea as providing the best chance for an export-led reconstruction of German industry.

At the same time, the Americans were thinking along the same lines. The Question was this: How do we stop these European countries from going to war with each other, especially as we seem to get dragged in every time? And the answer was: We create a Federal system, we create a United States of Europe. That idea became even more attractive as the Cold War developed: a United Europe would counter-balance the Soviet bloc.

This very simple American policy is very much alive over half a century later. Only recently, President Obama has told the United Kingdom government that the UK belongs in Europe and that the Americans expect it to remain there. We can expect a concerted push by the USA - and that will include the usual slush funds and dirty tricks - to ensure that in any Referendum, British voters vote to stay in the European Union. Forget it UKIP, the future of the UK has been settled in Washington - as it has been since 1945 (remember Suez?)

What Lebor doesn't do - rather surprisingly - is point out that this convergence of Nazi, post - Nazi and American thinking about the Future of Europe created a very broad coalition in favour of European unity, both economic and political. And because some of it has now been around so long, we easily forget that unity can indeed have real advantages not just for elites in the corridors of the Bank of International Settlements (corridors in which the European Central Bank was planned and created) but for everyone.

British tourists simply take for granted that they can go and buy as many €uros as they want before they jet off or drive off on holiday, that they can bring back what they want without having to pay import duties, that if they fancy buying a holiday home in Spain they can, and that if they drive down to it from Calais, there are no longer any border controls on the way. They do indeed need to be reminded that It Wasn't Always Like That and if it takes American slush funds to get that idea into their thick heads, all well and good.