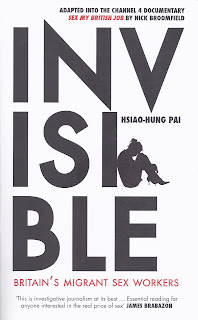 I greatly admired Nick Broomfield's film Ghosts based on the researches of Hsiao-Hung Pai into the lives (and deaths) of Chinese migrant workers in the UK and on that basis bought her new book on migrant sex workers in Britain.

Hsiao-Hung Pai works undercover as a Maid - a Housekeeper - in downmarket brothels in London and grim provincial towns like Portsmouth. As an employee she has to deal with aggressive and unpleasant bosses and ditto customers. In between, she tries to find out the life stories of the women providing sexual services. Some are illegal migrants (all the Chinese women)  some are legal, notably women from Poland . A few have been indisputably trafficked and coerced - the story of a Lithuanian woman, Galina, is particularly shocking. Some are pimped in more or less coercive ways. But probably the majority have gravitated towards sex work from low-paid jobs in food processing or restaurants. Very rarely do they have a good command of English, which is one reason I guess why they do not use the Internet and work independently as escorts. Whether they make good money depends a bit on the whims of their employers, a bit on the location of the brothel, a bit on whether or not it is targetted by the police, and a lot on whether there is a pimp skimming their earnings. But, overall, they seem to do better than they did as low paid workers in other sectors.

"Doing better" is defined by their ability to remit funds to their families back home. The most striking thing about Hsiao-Hung Pei's characters is that they are not young women. They are mostly in their thirties, often married, and generally with children and parents back home. Eventually, they hope to go home themselves. Hsia-Hung Pai doesn't point out that in the case of illegal migrants, this is easier said than done: if you don't have a passport or a passport with a valid visa, then you can only exit the UK as you entered it - illegally - unless you manage to get caught and deported. (I am curious to know: What happens if you walk into a police station, declare yourself an illegal immigrant and ask to be deported? And suppose you offer to pay the regular air fare?)

The pressure to remit money can be quite strong. In some cases, this derives from and extends a cultural expectation that adult children should look after their parents. In some cases - and this is me speaking not the author -  it just looks like another form of coercion. It is certainly not a benign relationship and, ironically, there are no doubt cases where the people back home are living easier lives on their remittances than those who are doing the remitting.

Hsai-Hung Pai's book is not about sex and doesn't really address the specificity of sex work except insofar as she points out that it isolates women from their own migrant communities, since it is rarely if ever something which can be discussed. This is clear, for example, in the case of Beata, a Polish Catholic who can't talk about what she is doing with other Poles and instead, in one of the book's poignant episodes, ends up discussing the ethics of sex work with an Ecuadorean Catholic punter (pp 245 - 50).

The book is quite readable. It's not theoretically strong or analytically focussed and it won't satisfy those who have strong anti -sex work agendas. Hsiao-Hung Pai tells a sympathetic, human interest story in the way John Berger and Jean Mohr did many years ago in their book on migrant male workers, A Seventh Man. One of the things that has changed since then is the large proportion of migrant workers who are now women.