Review: James Barr, A Line In The Sand 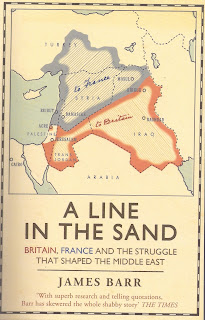 I am shocked. From the time in 1918 - when they were granted League of Nations mandates to run the former Ottoman Middle East -  until 1948 - when Britain abandoned Palestine - France and Britain fought like ferrets in a sack to extend their areas of effective control in the Levant. The Second World War did not even cause a blip in the struggle. No Method to advance their respective causes was ruled out - and when I say "No Method", I mean that. Terrorists proved useful to both sides, who supplied them with money and machine guns.

The First World War was in many ways an "Eastern" war, fought for future control of the crumbling Ottoman Empire. Russia, for example, wanted Constantinople and ports on the coast of northern Turkey so that it had full control over the Black Sea routes from Odessa and Batum to the Mediterranean.

Britain wanted - and at the end of the War, received from the League of Nations - Iraq, Transjordan and Palestine. There were two reasons. First, to provide a protective buffer to the east of British - controlled Egypt and the Suez Canal. Second, for Oil.

In 1912, the First Lord of the Admiralty, Winston Churchill, followed Naval advice and committed to switch the Royal Navy - the most powerful fleet in the world - from coal to oil. That entailed establishing fuel security and back then, fuel security meant owning the source of supply: it wasn't thought acceptable to rely on America (or its goodwill). So casting around for oil supplies, the British decided they just had to have oil-rich  Iraq with a southern outlet to the sea; and then they had to have Transjordan and Palestine to the west, so that they could run and control pipelines across to the Mediterranean.

So Oil is nothing new in determining foreign policy and Churchill's fuelling decision in 1912 has claims to be a Major Fact of British History which all school children should know.

The French wanted Syria and Lebanon (and a big chunk of Turkey, which they didn't get). Their reasons are a little less clear-cut. They wanted oil, for sure, but they also wanted to be a Great Power in the Middle East - and woe betide anyone who injured French amour propre. In 1943, de Gaulle's forces were unleashed on a War Crimes spree against the mandated populations of Lebanon and Syria, who had spent the War initially under Vichy French and then under Free French control. It didn't make much difference and the personnel were often the same. And the personnel often had little interest in the fate of Europe, only in French standing in the Middle East. And standing often meant a boot crushed in an Arab's face.

The French, the British, Arab Nationalists - and then the Zionists, who became increasingly important players in the Middle East conflict as Hitler expanded his power and his territories and America closed its doors to new migrants. By the end of Barr's story, Zionist terror groups - the Irgun and the Stern Gang - are being funded and equipped by the French to drive the British out of Palestine.

Back in 1940, Stern himself - the Stern Gang takes its name from him - had seen Hitler as a possible ally:


in 1940 Stern had passed a message into Vichy Syria, offering to fight for Germany if Hitler would support the "re-establishment of the Jewish state in its historic borders, on a national and totalitarian basis, allied to the German Reich" (page 268)

The emergence of the State of Israel out of a planned partition by the United Nations ( and no Plebiscites or Referendums among the inhabitants) appears in Barr's book as just another grubby episode in thirty grubby years of Anglo-French control of the Middle East, not least because Israel provided the victorious Allies with a convenient solution to their Jewish Problem - what to do with all the unwanted survivors of the Holocaust. Why, just make the Arabs make way for them.

Since 1948, America has joined in the struggle for control of the Middle East but the French and the British are still there, meddling as best they can. The history is no less grubby.

This is an excellent book, full of surprising and genuinely shocking material extracted from archives now open to the historian. I thought I knew a bit about this period of history; reading this book, I felt that I didn't.
Posted by trevor pateman at 07:57

Email ThisBlogThis!Share to TwitterShare to FacebookShare to Pinterest
Labels: British Mandate in Palestine, French Mandate in Syria and Lebanon, James Barr A Line in the Sand, Stern Gang