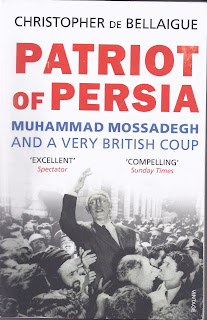 I liked this book because of its complexity. De Bellaigue has some straightforward Bad Guys - the arrogant and stupid British executives at Anglo Iranian oil, notably - but the rest of the cast are in shades of grey rather than black and white.
Posted by trevor pateman at 12:52