Review: Rajiv Chandrasekaran, Little America: The War within the War for Afghanistan 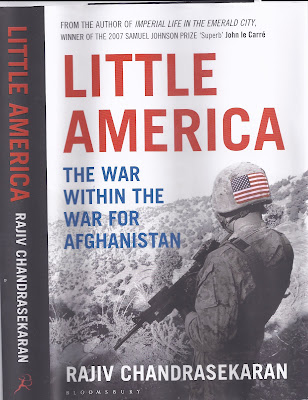 Some Americans just shouldn't leave the country. Many more don't and so have no reason to know that getting a Visa (what's that?) may involve a visit to a Consulate (what's that?) (page 172). All think they understand foreign policy.

When it first came out, I read Chandrasekaran's devastating critique of American civilian rule in Iraq, Imperial Life in the Emerald City so when I saw this new book in the shop I bought it without even riffling the pages. Now I have read it, I think it confirms him as a brave man, a fine investigative journalist, a good writer, and a shrewd critic. ( His Bibliography, though, is rather short and does not include Braithwaite, Cowper-Coles, or Abdul Salaam Zaeff ).

The author got himself into Helmand as an embedded journalist with the Second Marine Expeditionary Brigade (page 335) and develops his analysis and critique very much out of his account of the Obama "surge" into southern Afghanistan in 2009. He details the problems which arose both from not having enough boots on the ground (the British failure in Helmand) and from having too many: the Marines ended up with outposts in places which simply weren't worth it, not least because the government in Kabul is neither able or willing to follow up successful counter-insurgency operations with the installation of its own civilian administration. In one instance, the Marines even end up in a village where they are greeted as Russians - no one from the outside world, apparently, having been there since the 1980s. (page 245 ). At the same time, key areas like Kandahar were repeatedly neglected.

Whatever the official policy, some soldiers did not believe in counter-insurgency (making friends with the locals, fighting the insurgents) so they just went their own way and killed anyone who didn't look like an American. Chandrasekaran describes one bad case in detail (pp 152 - 161) and indicates (but rather in passing) how damaging to America's war aims such things have been.

More central to his critique is the failure of Military (Pentagon) and Civilian (State Department) to work together effectively. I guess there is nothing new in this. It's as familiar as the old story of the FBI and the CIA. Chandrasekaran reserves his most powerful criticism for USAID which comes out as ignorant and incompetent. If you were running a poor country and read this book, I reckon you would immediately ask for a report on the local work of USAID and start wondering whether, like Mr Romney, these were people who really shouldn't have left home.

In the course of his critique, Chandrasekaran names and shames in a way which would not be possible in a British book on the abject British failure in Afghanistan: at page 182 - 84, for example, two named State Department officials are characterised in terms which, to me, are simply career - terminating.

The critique of USAID is the least nuanced part of the book and reminds me of the well-deserved trashing of the Coalition Provisional Authority in Imperial Life in the Emerald City. The more nuanced critique of the rest of the book is perhaps more valuable because it shows that though Afghanistan, unlike Iraq, had claims to be the "good" war it was never clear what the war was for. Or else, when that was articulated as "making Afghanistan ready for hand over to a good-enough Afghan government" then it became clear that there was no such government around or likely to become available in the near future. The Karzai regime, in many accounts (not just Chandrasekaran's) is just not going to step up to the plate.

It costs $1 million to keep one American soldier in Afghanistan for one year (page 324). You can see why Obama wants out. Reading this book written from an American point of view, with very little attempt to characterise "the Insurgents", you can also see why so many Afghans feel, "We don't want you here. We don't like you. Get the hell out" (page 238)

The final chapter of this book is titled, "What We Have Is Folly"
Posted by trevor pateman at 09:57