Review: Nassim Nicholas Taleb, The Black Swan: the Impact of the Highly Improbable 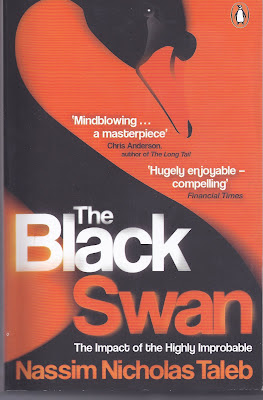 I took on the The Black Swan in the 2010 Revised edition but I only read the first edition material. This took me to page 300, by which time I had exhausted my enthusiasm for this bar-room brawl of a book. Maybe some other time I will tackle the second edition material (pages 305 - 379).

Taleb wants to convince us of the importance of the truly unpredictable in some of the most important areas of our life.

Apparently well-confirmed generalisations ("All Swans are White") can be upset by a single counter-instance, a pesky Black Swan. That counter-instance can be game-changing, as when the Thanksgiving turkey discovers that today he is not going to be fed but instead slaughtered. This is the old Problem of Induction from past to future: no matter how many confirming instances you can gather, they do not protect you from tomorrow's disconfirming upset.

Areas of life which are elaborately modelled - the behaviours of markets, for example - are in fact areas of massive uncertainty, vulnerable to the fortuitous event which may make (or more often) break the bank. It is utterly foolish to proceed as if this was not so. Taleb's most striking example comes towards the end of his argument (pages 275-76) when he casually tells us that on the US stock market over the past fifty years movements on just ten days account for half of the aggregate opportunity for making or losing money. Think a bit about that and you may soon come to the conclusion that the stock market is one of those things not worth getting out of bed for.

Worse, when we try to explain What Went Wrong in stock market crashes and such like, we promptly fall victim to the Narrative Fallacy believing that if we can seem to make sense of it then we have made sense of it. In this case, the sceptic points not to the problem of induction but to the problem of the underdetermination of theory by data [Quine, Goodman], the problem that for any set of data there are an infinite number of theories which will make sense of them (pages 185 - 88).

Taleb has a rococco Bibliography (pp 401 - 29) and it seems a bit unfair to quibble with him for skipping classes. Nonetheless, I often felt that if he had been a bit more patient with some of the philosophy of science of - say - the past fifty years, then he could have presented his arguments both better and with more acknowledgement of their vulnerability.

In particular, I would have like to have seen a clearer acknowledgement that philosophers of science have tried hard to get us to see the asymmetry of explanation and prediction. They have highlighted how different are closed and open systems in their amenability to "scientific method".

At the same time, they have acknowledged the very large problems created by the underdetermination of theory by data - with Paul Feyerabend going off in the anarcho-skeptic direction (much to the dismay of Popper's pupil, Imre Lakatos) and someone like Noam Chomsky using a Naturalist solution - which goes back to C.S.Peirce - to argue that well, we just are adapted to understanding the world around us (in Chomsky's case, this is the claim that children just are adapted to figuring out the grammar embedded in the limited samples of language output to which they are exposed). In effect, it's an evolutionary argument.

In the case of Taleb's "narrative fallacy" my own view is that the pastness of an event constitutes it as an event in a closed system - the passage of time closes the system. Hence, we can in principle hope to explain it in a way that we cannot even in principle hope to predict events in open systems (the future).

Nassim Nicholas Taleb is a sort of Philip Roth of Risk and Uncertainty. If you like Roth, you will probably like Taleb.