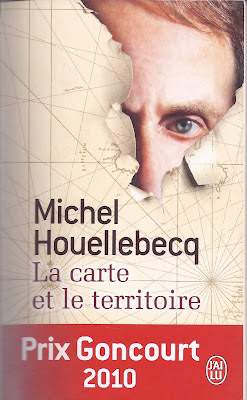 The first two sections of this book, extending over 260 pages, tick all the boxes for a very good novel: the structure is there, the pacing is there, the style is there, the content is there. I read them with pleasure and anticipation.

Then comes a hundred page policier which starts abruptly in quite another place from where the first two parts ended. It casts Houellebecq himself as the murder victim and eventually incorporates the other central character of the novel, Jed Martin, into the plot and then - the story spilling over into the Epilogue - proceeds to a reasonable resolution. We end up with a satisfactory, but not outstanding, detective story.

The Epilogue then prolongs the story into the future. All Epilogues are risky ("Reader, I married him") and I thought this prolongation ill - conceived: it is contrived (it uses a naff Rip van Winkel device) and sentimental ("Reader, he died").
_________

In the first 260 pages Houellebecq crafts a modern artist, Jed Martin, and very carefully charts the development of his artistic work. Just like Houellebecq, Martin is interested in the nuts and bolts of life (literally - his starting point is to photograph quincaillerie) and in the everyday: he photographs Michelin maps and this gives him his artistic breakthrough as well as a love affair. Houellebecq develops all of this patiently, in an undemonstrative style. Along the way he shows he can do knock-about humour (finding a plumber), develops a convincing portrayal of a difficult father-son relationship, and introduces himself as a character - Houellebecq is asked to write the Introduction to the catalogue for Martin's second exhibition. This allows a large number of themes about contemporary art and society to be developed. Houellebecq is no slouch: he is a very well-read, very thoughtful writer who knows how to express himself brutally and to effect.

So I read with pleasure and interest - and despite the fact that it is what I think of as a Metropolitan-Parochial novel: it's the kind of novel in which the chattering classes of Paris can recognise themselves. I am sure this is one reason it got the Prix Goncourt where earlier (and more unconventional and challenging) novels by Houellebecq failed to do so. (Les Particules Elementaires and Plateforme, which I read some years ago [the former in the English translation, Atomised], are surely at least as important as this novel).

Then comes the policier with Houellebecq as victim and Jasselin as the wife-loving and dog-loving flic, who retires with the murder still unsolved. (He asks his subordinate Ferber to call him if ever the case is resolved and the loyal Ferber does just that; it would fit well in the film).

There is quite a lot of sentimentality here, some of it expressed around Jasselin's wife and rather more around his dog. I can't buy into this. I am happy with Paris as a city of romance; I just wish it wasn't a city of romance and dog shit.

Houellebecq closes by following Jed Martin into the future. Like Houellebecq before his murder, he retreats to the countryside but encloses himself behind electrified fences. He exits his estate from a specially constructed road in order to avoid the awful village in which he lives. And then, suddenly, many years later he decides to venture out into the village he has avoided for so many years... and, Lo!, it is completely transformed. This is toe-curlingly bad (where was Houellebecq's editor: cut everything after page 384 and you have a better ending) and it is not retrieved by an account of Martin's artistic work in the final years of his life: this is now too little and too late.

My French is good enough for a novel like this (I just get stuck over acronyms and no doubt miss incestuous allusions), but not so good that I can read any-old 400 pages. A book has to engage my interest and this one did. He deserved his Prize for the first 260 pages.

Just one thing I cannot develop without re-reading the novel: I don't think the chronology is very secure. Over which period of years does the novel spread? And connected to this, why does it seem to me that Martin and Houellebecq and Jasselin are all characters who prematurely age? They are all old men before their time.
Posted by trevor pateman at 00:46