Review: Bernard Wasserstein, On The Eve 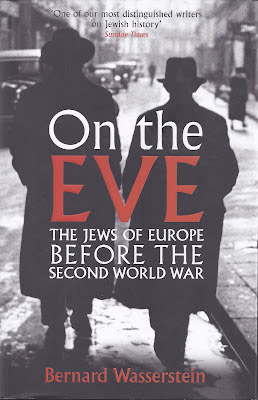 Some years ago, I visited the Museé d'art et d'histoire du Judaisme in Paris for an exhibition of the photographs of Roman Vishniac under the title "Un Monde Disparu". I used a postcard from the exhibition as a bookmark while reading On The Eve.

Wasserstein does not mention Vishniac anywhere in his 552 pages and, though he uses some photographs as illustrations, he does not use one of Vishniac's. I don't know why, though I now read on Wikipedia that there is controversy over the way Vishniac put together and wrote up his work, for example, combining images from different sources as if they belonged to a single scene. But that doesn't seem enough to me to ignore the work totally.

Anyway, I found it all a bit disconcerting since Vishniac, working without the benefit of hindsight, saw the Jews of Europe through much the same lens as now does Wasserstein, "The demographic trajectory was grim and, with declining fertility, large scale emigration, increasing outmarriage, and widespread apostasy, foreshadowed extinction" (p 434).

Wasserstein's book is, at best, encyclopaedic and, at worst, miscellaneous: "In Hungary, where name-changing was particularly common, Joseph Löwinger, a banker, changed his name upon ennoblment, to Lukács de Szeged. His son, György, born in 1885, was therefore known as von Lukács. In 1919, when he served briefly as deputy commissar for education in the short-lived Communist régime of Béla Kun, he dropped the von. Writing mainly in German, it was as Georg Lukács that he became the best-known Marxist literary critic of the age" (p 197)

A lot of the prose is as plodding and inconsequential as this and, at many points, I just wanted to give up. One cannot read a very long book for snippets of information alone.

There is a sustained engagement with Yiddish, as language and as literature. Wasserstein transliterates and thus makes the language more accessible to an outsider, but at the price perhaps of making it seem more accessible than it really is. More importantly, I felt that here a general historian was trying to do work which needs the co-operation of some pretty heavyweight historical linguists or sociolinguists if one is to hope to understand the dynamics of a minority language whose spoken form is partly inter-intelligible with one surrounding and often dominant language (German) but whose written form is not, since it uses a different alphabet. (The same is true of Judeo-Espagnol, which Wasserstein also discusses).

Structurally, there were times when I would have welcomed some comparison with the situation of Europe's other minorities of the inter-war period, in particular, the Roma. I thought that would help one understand more clearly what is specific to the Jewish experience between the two world wars (essentially, the time frame of this book). And, perhaps for no very good reason, I would have liked just a little about the Kairates especially as the book includes extensive discussion of Jews in Lithuania and Crimea - both Kairate strongholds (well, as Kairate things go). They did, after all, practice a Jewish faith. It is only with hindsight that they become radically other because the Nazis classified them as racially not Jewish.

Wasserstein most of the time avoids the pitfalls of hindsight and most of the time he calls a spade a spade and a rascal a rogue. The Munkácser rebbe appears repeatedly through the book as a warning against religious fundamentalism of all kinds. (I hope I don't misread Wasserstein here). More generally, I found it impossible to read Wasserstein's descriptions of religiously-controlled Jewish primary schooling in inter-war eastern Europe without thinking about what I read in my newspapers today about Islamic primary schooling in,say, Pakistan.

Maybe this book just attempts too much - the apparatus runs to 116 pages - and therefore becomes encyclopaedic and not very readable. Maybe there is just not enough analytical or theoretical zest to focus the remarkable amount of information assembled here.
Posted by trevor pateman at 09:29

Email ThisBlogThis!Share to TwitterShare to FacebookShare to Pinterest
Labels: Bernard Wasserstein On The Eve, European Jews between the Wars, Roman Vishniac, Yiddish language and culture in Europe