Review: Daniel Immerwahr How To Hide an Empire 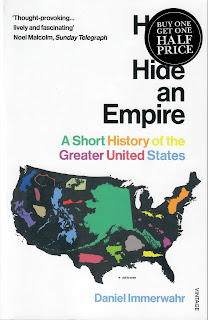 I recall from fifty years ago trying to explain to a class of fifteen year olds who had me as their (unqualified) History teacher that a country could have an Empire without having territories dotted all over the globe and coloured red. I used the example of Imperial Russia which had built up its empire by extending its land borders in every possible direction, the new territories often enough specialised producers of desirable commodities (coal, copper, furs, hemp, tea, wine …  ) which could be shipped back to the heartlands. At the same time, Russia reckoned (rather perversely) that by extending its borders it made its already unbelievably long borders more secure. True, the extensions did place St Petersburg and Moscow farther away from frontiers which invading armies would have to breach in order to get started on a war of conquest but, equally, invaders might just settle for the asset-rich borderlands, as did Germany late in World War One.

There was one anomaly in this simple story, explained at the blackboard with many chalk arrows: Alaska, separated by a short stretch of sea from the Russian mainland. But - ha, ha - Russia sold Alaska to the USA and that, as it were, proved my case.

Alaska figures in Daniel Immerwahr’s extraordinary book as the largest bit of the Empire which America built up over the course of a couple of centuries but in ways which often gave the impression that there was no such thing as an American Empire. Empire, on the British or French models, was acquired by conquest; America just bought Alaska and that surely was different. It had already bought Louisiana and would go on buying - in World War One, the American Virgin Islands were bought from Denmark. In the very recent past, President Trump reprised the old idea with an offer to buy Greenland from Denmark. He was shocked by the rebuff.  After all, money can buy anything can't it so what's wrong with my money?

It’s a long time since I read a book like Immerwahr's where virtually every page tells me something I never knew or imagined, from big stories to little anecdotes. I am sure that many readers of this book will go around afterwards  accosting anyone who will listen with Did you know …? stories. Some are shocking like those which narrate the devastations wreaked on the Phillipines by successive occupiers (Spanish, American, Japanese) and on Puerto Rico; some are comic like the story of the US State Department laying territorial claim to three small islands which it had already long-ago laid claim to and indeed was currently occupying. They had an excuse: by the 1930s the USA had laid claim to so many Pacific islands (some even inhabited) that it was understandable that they had lost track.

Immerwahr emphasises how these many territories did not fit inside the model USA designed by the US Constitution; they were anomalies but anomalies with several different statuses. Some were reckoned to be on the path to full statehood (Alaska, Hawaii - they got it in 1959); some were slated for independence (the Philippines); some had appointed governors and some were under military administration. Most had some military purpose and still do.

Anomalous territories can, of course, be found all over the world. Europe is full of them, most of them continuing to exist because they provide the rich and powerful with tax havens and money laundering centres: the Isle of Man and the Channel Islands (possessions of the British Crown); the City of London; Andorra (Franco-Spanish Bishops isn’t it?); Liechtenstein; Monaco; San Marino. In Rome, if you want to launder money, you just walk across the non-existent border between Italy and the Vatican State and straight into the Vatican Bank.

Some anomalies are military: on the island of Cyprus, the large Sovereign Base Areas of Akrotiri and Dhekelia are wholly owned by the United Kingdom and are counted as British Overseas Territories, anthem God Save the Queen but as a nice anomaly, currency… the €uro.

Immerwahr has interesting stories to tell about the impact of leased American military bases on local populations the world over. Some are about the ABC underside of military occupation: arrogance, brothels, and crime. Others are about what can be huge economic gains from trade; some are cultural: Immerwahr (in a fascinating account)  links the rise of the 1960s Liverpool music scene (the Beatles included) to the presence nearby of a very large US military installation.

That is just one example of the ways in which he has done some very diligent research and turned up interesting by-ways which would  have been missed had be started from a more theoretically rigid approach than is evident in his four hundred page book. I read all of it with interest and quite often amazement. For once, I find myself in complete accord with the puff printed on the cover of my copy.

Email ThisBlogThis!Share to TwitterShare to FacebookShare to Pinterest
Labels: Daniel Immerwahr How To Hide an Empire