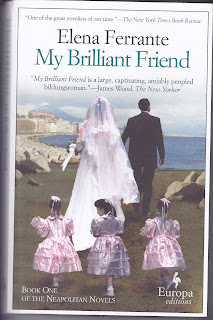 This book was getting lots of Likes in the Books of the Year lists published in English newspapers and magazines, so I bought it and read it with pleasure.

The 331 pages of my translation are broken into 62 chapters and most of those chapterettes are emotionally charged, strongly visualised, dramatic vignettes of life in a working class quarter of 1950s Naples. Think Bicycle Thieves or La Strada for the atmosphere – but also Romeo and Juliet. There is more than a hint of the Camorra and an edginess created by the shared belief of the main characters that terminal violence is the way to respond to disrespect – well, and pretty much anything else. It wasn’t ISIS which invented that idea.

The novel is about two girls growing up and the book takes them up to age 16 and the marriage of one of them, Lina, the closest friend and alter ego of the narrator, Lenù – the familiar form of Elena, thus casting the author Elena Ferrante as the Lenù of the novel.

But at least for this reader, Lenù is much less interesting than Lina, so much so that I would not be surprised if in reality Lina and Lenù were one person. In the novel, their paths diverge just because clever Lenù stays in the school system and begins to be separated from her community of origin whereas brilliant Lina is withdrawn from school and kept in the home and shoe repairer’s shop of her family. But for most of the novel, she stays one academic step ahead of Lenù – in Latin, Greek, English - by borrowing books from the local library. The phrase "My Brilliant Friend"is used by Lina about Lenù once in the book, and the title reciprocates the compliment but with more justice.

Lina is an Original, genius, tomboy and reckless, who as the novel develops bends to the demands of her community so that with no experience of independent life – just a rich and complicated inner world of reservation and critique -  she marries at 16. It is her less original friend who is kept away from that fate by school (as much as anything) and who by the end of the novel begins to see that she will need to break with her community and culture or origin. If you like, she sees that the way out is through the door – not through the inner emigration which Lina practices.

Volume Two, The Story of a New Name, takes the story of Lina and Lenù into their early twenties. Lina has a child and leaves her husband for a life of hard work and poverty; Lenù leaves Naples for Pisa, graduates from university and aged 23 publishes a novel. Once again, I felt that Lina and Lenù are two sides of one person. Lina's notebooks - entrusted to Lenù - provide a simple literary device which enables Lenù to know everything about her absent friend's life.

The chapterettes (125 in 471 pages) remain highly charged and constantly provide fresh material. At times, I visualised it as a TV soap opera or sitcom (without the com) - a fixed cast of characters leading dramatic lives. It lends itself to TV forms more than to treatment as a film - a film would have to edit out three quarters of the material

The volume ends dramatically, like its predecessor, creating the space for the third volume:

Added 3 January 2016: The two final volumes follow the lives of both women into their sixties and now much more space is given to Lenù's narrative of her own life, which is both unsparing and defensive.

In volume three, I was puzzled by the disappearance of the Camorra and its replacement by an assortment of "fascists" and "criminals". To be honest, I wondered if the author had been spoken to and told to be more careful. Volume Four brings the Camorra back but in a way which rather confirms that feeling - Lenù's sister marries one of the two principal Camorrists of the first volume.

There is a lot here about Italian politics in the 1980s and the ways in which Italy was (and still is) a failed state which has never been able (for example) to offer a fit for purpose Justice system to its citizens and so has provided the space in which the Mafias continue to thrive. If the State won't offer you protection, then the Mob will: Lina is explicit about this at one point. As recently as  2011 The World Bank rated Italy 158 out of 183 countries "for the efficiency of its justice system in enforcing contracts", just three places above Afghanistan. [ See my review of John Dickie's Mafia Republic on this website, 21 July 2013]

There is lots, lots more and in the end perhaps too much: the narrative structure is really "and then and then and then ..." which doesn't create pace and which does not create emotional climax for the reader at crucial moments (as when Lina's young daughter disappears). The absence of authorial humour from any of the hundreds of scenes is striking.

The editing of these books is impeccable. I could find fault with only two things: the occasional use of pseudo-generic "he" by the translator and a reference at page 105 in volume 4 to "Thailand" where the context of 1980s political debate clearly indicates that it should read "Cambodia" at the time that it was the Kampuchea of the Khmer Rouge.