Review: Owen Jones, Chavs. The Demonization of the Working Class 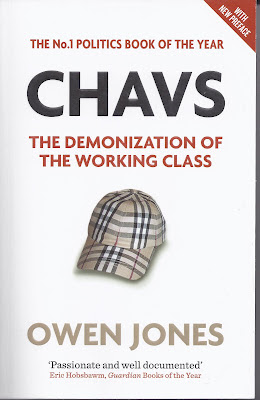 This is a passionate, highly readable polemic. It makes a forceful case quoting from politicians in reflective mode, from Fleet Street stories and appallingly unreflective Opinion columns, and from informal person-in-the-Ashington-High-Street interviews.

Margaret Thatcher took on trade union power and won. But at enormous cost. She solved the problem of striking workers by closing down the mines and trashing manufacturing industry. Let them eat Benefits! She dealt with the solidarity of working class communities by attacking social housing, setting those able to buy under Right to Buy against those unable or unwilling to. She encouraged Every Man for Himself.

Her successors - Tony Blair included - ended up attacking the workless as shiftless and the inhabitants of the remaining social housing as feckless and feral. Chavs the lot of them.

The rich got richer (as both Thatcher and Blair intended) and the poor got poorer. The financial sector boomed until it (quite recently) busted. In place of manufacturing jobs, casualised, part-time and low paid service sector jobs were all that was on offer. Trade unions had no purchase on this new world of crap employment.

Largely ignored by New Labour, the C2DE classes eventually stopped voting, allowing power to pass to arrogant posh boys who don't know the price of a pint of milk. Some have bought into the argument that the jobs and the houses have been taken by immigrants but few have actually voted BNP.

The solution? A new class politics arguing and fighting for better jobs, affordable housing, a greater equality of income with differentials restored to the levels which prevailed from the 1950s to the 1970s,actual representation of working class people and their interests in Parliament and the media.

It's almost convincing, especially when twinned with something like Richard Wilkinson and Kate Pickett's The Spirit Level.

One problem, it may be too late. The long-term damage has been done and cannot be reversed. And even if that is too pessimistic, things can only get better for a new generation in new places not for those still living in the old industrial and mining heartlands.

It is not enough to say that Margaret Thatcher trashed manufacturing industry and that New Labour ignored it. There is a very complicated history which involves much more than "globalisation". For example:

- for long periods, the UK maintained an overvalued currency which made exports uncompetitive and imports the opposite; it also enhanced the role of the City long before New Labour
- education policy never coalesced around any core commitment to maintaining high-quality technical and scientific education surrounding and supporting research, development and innovation in manufacturing industry; in some cases, factories failed because they had become museums of how things used to be done. Compare Germany! is the obvious thought.
- no government succeeded - though Labour in the 1960s tried - to achieve a compact between unions and employers which would ensure both a share in the profits to workers and secure production schedules to employers. Owen Jones does not go back far enough in his history to have to confront the sheer counter-productive disruptiveness of strikes, official or "wildcat". Once again, Compare Germany! is the obvious thought.

The migrant workers who arrived in this period, largely from the EU, went to places where there were jobs and not enough people or qualified people to fill them. In practice, London and the south east, though in agriculture they would have spread more widely (Jones never writes about agriculture). The UK-born unemployed were simply living in the wrong places.

In coming to London and the south east, immigrants came to areas where housing was scarce and expensive. Meanwhile, up North, houses were being boarded up and demolished by the thousand.

But what could government had done? It could (let us suppose) have acted directively in one of two ways: it could have told unemployed people up North (where they had housing) to move South where there were jobs (but no housing). Thus Norman Tebbitt and unacceptable.

Alternatively, it could have told employers to move their jobs up North and employ unemployed people. Unfortunately, most of the jobs were not in manufacturing. They were service jobs required by London's economy. You cannot tell someone to move their posh restaurant from Mayfair to Merthyr Tydfil. There ain't going to be any customers.

So much as I admire Owen Jones' defence of people who have been wronged, I think that a new class based politics will have worse than an uphill struggle. It will be a labour of Sysyphus.

The United Kingdom is a country in long-term historical decline. Had it stayed more democratic, with high levels of intelligent popular participation, it might have avoided some of that decline. Had it had a better class of politician, ditto - but now we really are scraping the barrel. And decline is just that: in the end, you can see it all around you as Owen Jones has done.
Posted by trevor pateman at 09:41