Review Jack Kerouac On the Road 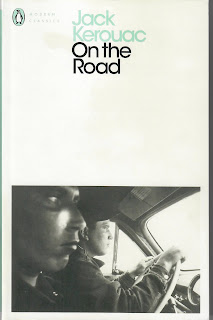 I can see how this book might have been a publishing sensation in 1957 just because it depicts a very different post-War American world to that represented in the dominant culture of magazines, TV, and political discourse. Sol, the narrator, and his buddies criss-cross America for the hell of it and everywhere they encounter their likes and a world of bars, jazz clubs, flop houses and whorehouses which cater to the needs of young white ex-GI males who live for kicks heightened by alcohol in excess, dope, dangerous driving, and access to girls (preferably teenage) who come free or, at least, cheap. They steal, they leave wives and babies behind, they beg and borrow. They are bums, just one grade above the hobos thanks to background Aunts, Uncles, and GI payouts. But they aren’t gun-toting and whatever racism they express is contradicted by their openness to Black cultures and non-white sexual partners which in 1957 would also have been unusual - remember that in World War Two the US army operated in racially segregated units.

But, No, because the structure and style is wearying. The novel has no plot, it’s structured as And then…and then…and then and in case you don’t get the message it repeats itself as journeys are repeated - there is no final destination despite a sort of belated attempt in the closing pages ( 280-81 in my edition). Even Kerouac’s editors queried this, reckoning that the book should at least be shorter. As for themes, it would be a very dutiful, sober reader who sought to extract a coherent Beat philosophy from the words and actions of the central figure of Dean Moriarty whose manic search for beatific moments of ecstasy and revelation drive the narrative rather as he drives the cars, which are also thematically central.

The novel itself was written at great speed on a single roll of paper (Kerouac glued sheets together as he fed them into the typewriter), so its method of production was part of the manic world it depicts. But as with surrealist “automatic writing”, writing at speed (or on speed: Benzedrine in Kerouac’s case - see  Introduction xix) does not guarantee inspiration; it may produce no more than perspiration. As one critic observed of the hagiographic claim for the speed at which On the Road was written, That’s typing, not writing. It’s true, Kerouac did re-type and revise the book as it struggled towards belated publication, but much of that seems to have been with the aim of removing potentially libellous material about characters who may have been re-named but were based on real people.

I only had one encounter with any of Kerouac's cast of real-life characters: at the 1967 London Dialectics of Liberation congress, held in the capacious Roundhouse, I chanted Om..... on the instructions of Allen Ginsberg, Carlo Marx in the novel.